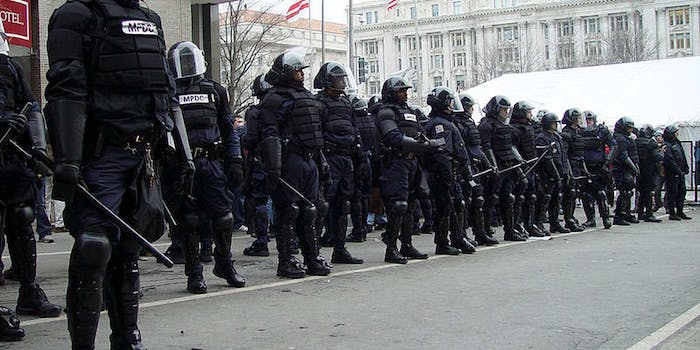 But will anything actually get done?

In many respects, last Wednesday night may turn out to be the single most important event in the history of American law enforcement in a generation.

For most of the week, the images flooding out of Ferguson, Mo., and onto social media resembled nothing so much as a military occupation. Officers from the St. Louis County Sheriff’s Department patrolled the streets in full body armor while toting machine guns, as millions of Americans started to suddenly wonder why law enforcement officials were outfitted as if they were going into a war zone.

When all you have is riot gear, even peaceful protests start to look like riots. By giving police officers the tools to use overwhelming force and military-style tactics at every opportunity, it creates a situation that may be safer for individual police officers, but is significantly more dangerous for society as a whole.

The St. Louis County Police Department, which was initially responsible for maintaining order in the city, was relieved of its responsibility by Missouri Gov. Jay Nixon, who put the state’s Highway Patrol in charge. With this change in leadership also came a change in strategy—dispensing with the military-style hardware and tactics in favor of a softer model of policing. The difference was immediate and impossible to ignore. Protests the day after the switch were calm, respectful, and virtually free of voilence.

At this time at night on Monday, residents were in real fear for their lives. Tonight they’re taking selfies with cops.

Whether this calm will hold permanently is difficult to say, but the pictures and videos of the Ferguson protests triggered a national wind that started to blow against the trend of police militarization, which has taken place across the country over the past few decades. Blowing in with this wind is a cadre of politicians from across the political spectrum, who have come out in favor of creating a future where it will impossible to confuse a photograph of a police officer in Missouri with one of an Army sniper in Afghanistan.

This picture isn’t from Iraq or Afghanistan, it’s from Ferguson, Missouri. This should never, ever happen here. pic.twitter.com/B1YSh0Ehtb

The most substantial effort to fundamentally alter the way police departments operate post-Ferguson comes from Rep. Hank Johnson (D-Ga.), who plans to introduce the Stop Militarizing Law Enforcement Act, which is aimed at putting controls on a Department of Defense program that provides surplus military equipment, from armored vehicles to assault rifles, to domestic law enforcement agencies for free.

This DoD program gave half a billion dollars worth of military-grade hardware to police departments across the country in 2011 alone.

“Our main streets should be a place for business, families, and relaxation, not tanks and M16s,” Johnson wrote in a letter to his fellow Democrats in the House of Representatives. “Our local police are quickly beginning to resemble paramilitary forces. This bill will end the free transfers of certain aggressive military equipment to local law enforcement and ensure that all equipment can be accounted for.

‟Before another small town’s police force gets a $700,000 gift from the Defense Department that it can’t maintain or manage,” Johnson continued, “it behooves us to rein in the Pentagon’s… program and revisit the merits of a militarized America.”

Johnson, who has said he plans to introduce the bill in September, is far from alone. On Thursday, a trio left-leaning lawmakers—John Conyers (D-Mich.), Robert “Bobby” Scott (D-Va.), and Steve Cohen (D-Tenn.)—penned a letter sharply questioning the use of military tactics.

In Ferguson, why do local police dress in military-style uniforms and body armor, carry short-barreled 5.56-mm rifles based on the M4 carbine, and patrol neighborhoods in massive armored vehicles? At best, confronting demonstrator with this show of force is a sign of poor judgement. In all likelihood, the decision to adopt a military posture only served to aggravate an already tense situation and to commit the police to a military response.

Sen. Claire McCaskill (D-Mo.) echoed that sentiment in a statement released the same day. ‟We need to de-militarize this situation—this kind of response by the police has become the problem instead of the solution,” she said.

Challenges to police militarization haven’t exclusively come from the left side of the political spectrum.

Conservative Sen. Rand Paul (R-Ky.) penned an op-ed for Time earlier this week, slamming the scramble by departments to obtain paramilitary hardware and use paramilitary tactics, calling it ‟a systemic problem with today’s law enforcement.”

However, there are still a large number of politicians who charge that police militarization is a necessary element in keeping the country safe, especially when it comes to protecting against the threat of terrorism.

In what’s undoubtedly the single most infuential book written on the topic, Rise of the Warrior Cop, journalist Radley Balko explains how, even though large-scale protests are the most publicly visible manifestations of police militarization, it’s a trend that’s crept into virtually every aspect of the way law enforcement in America operates.

In an excerpt from the book published on Salon last summer, Balko describes how local police forces use heavily armed SWAT teams to accomplish tasks that, from the outside, would appear to be shockingly mundane:

By the end of the 2000s, police departments were sending SWAT teams to enforce regulatory law. In August 2010, for example, a team of heavily armed Orange County, Florida, sheriff’s deputies raided several black- and Hispanic-owned barbershops in the Orlando area. More raids followed in September and October. The Orlando Sentinel reported that police held barbers and customers at gunpoint and put some in handcuffs, while they turned the shops inside out. The police raided a total of nine shops and arrested thirty-seven people.

By all appearances, these raids were drug sweeps. Shop owners told the Sentinel that police asked them where they were hiding illegal drugs and weapons. But in the end, thirty-four of the thirty-seven arrests were for “barbering without a license,” a misdemeanor for which only three people have ever served jail time in Florida.

Well before the events in Ferguson, which were sparked by the shooting death of an unarmed African-American teenager at the hands of a local police officer, the issue was at the forefront of the national conversation. Americans showed a deep and profound discomfort with the idea of militarized forces policing the country’s civilian population. A poll conducted last year by the libertarian Reason Foundation found that 58 percent of Americans think that local police departments’ use of “drones, military weapons, and armored vehicles” has gone too far.

Even so, recent history shows there’s no guarantee that legislative efforts like Johnson’s will ultimately go anywhere.

In June, progressive firebrand Rep. Alan Grayson (D-Fla.) attempted to attach an amendment to a Department of Defense appropriations bill that would have entirely cut off the funding to the very same DoD program that Johnson’s proposed legislation is attempting to curtail. The amendment was struck down by a 62-355 margin. Vanity Fair notes that included in that overwhelming 355-member block was Rep. William Lacy Clay (D-Mo.), who represents the St. Louis suburb in the House.

Regardless of whether Johnson’s effort ultimately proves more successful than Grayson’s, getting rid of this single DoD program will only eliminate one spigot from which police departments obtain military-style hardware. There are still myriad federal programs, such as Byrne and Community Oriented Policing Services grants, providing direct funding for police departments to obtain military hardware.

Yet, for advocates of police demilitarization, there is some hope. Members of the Senate’s Armed Services Committee are working to develop a cohesive set of bipartisan reforms to the DoD program.

“Congress established this program out of real concern that local law enforcement agencies were literally outgunned by drug criminals,” Sen. Carl Levin (D-Mich.) said in a statement about the effort. “We intended this equipment to keep police officers and their communities safe from heavily armed drug gangs and terrorist incidents. Before the defense authorization bill comes to the Senate floor, we will review this program to determine if equipment provided by the Defense Department is being used as intended.”

That said, there’s no guarantee any piece of legislation, let alone one so fraught with controversy, will make it though the least productive Congress in history. But the radical change that occured in Ferguson from one day to the next, between an occupation by militarized police and one that went to great pains to eschew those tactics, shows that a militarized police force is neither inevitable nor immutable. In fact, we may all be safer without it.