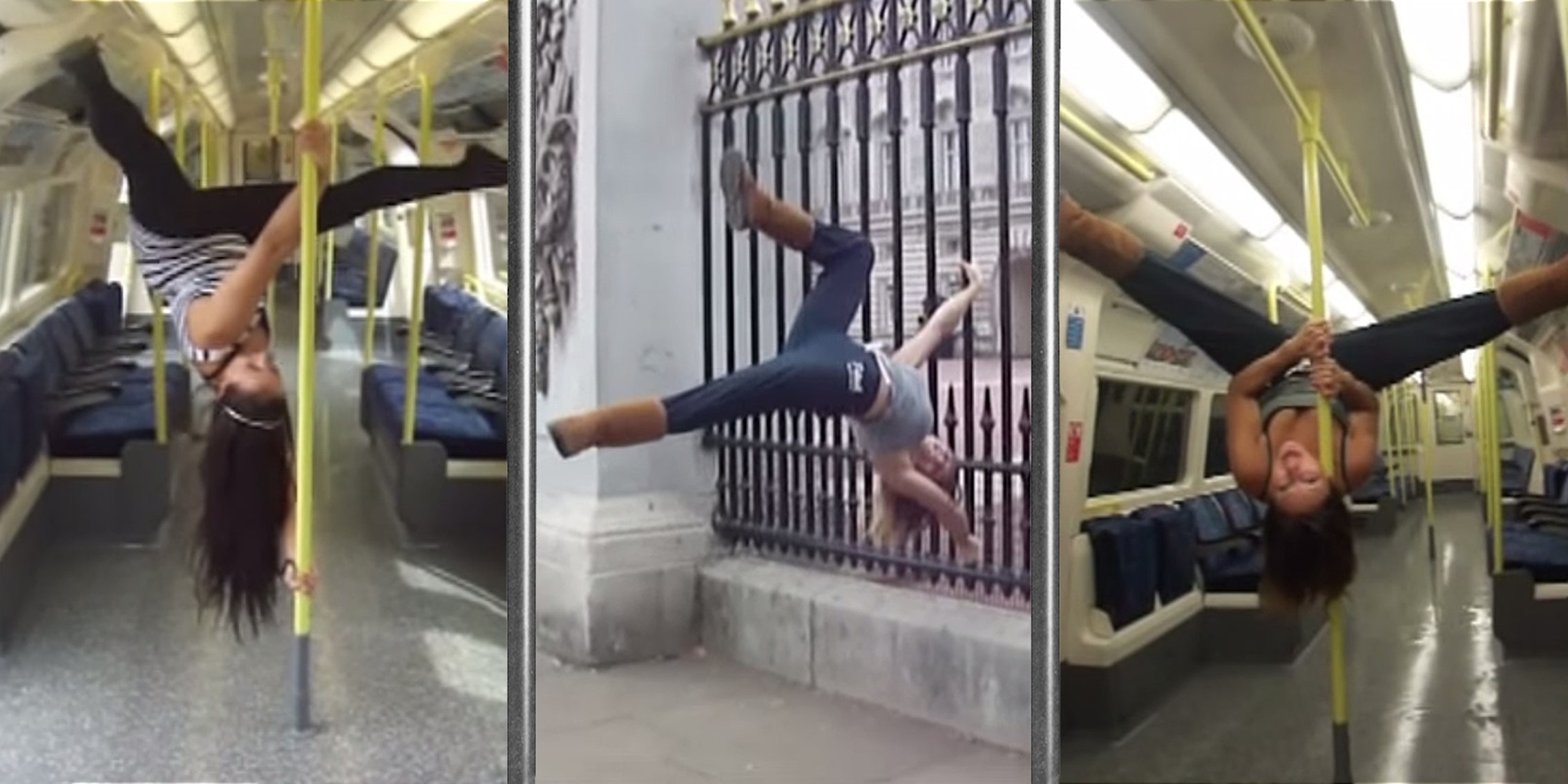 Parkour gets sexy thanks to amazing #StreetPole dancers

Check out these buff, upside-down athletes.

Pole dancing isn’t just for strip clubs anymore. The sexy art form has taken over dance studios and gyms around the world with fitness instructors offering classes like Yoga Pole and even underwater pole dancing in swimming pools. A stripper pole has morphed into just another piece of workout gear—as commonplace as that bouncy inflatable ball thing that the mayor of Portlandia sits on.

Now, pole dancing has become parkour for the strong, sexy set. While parkour involves flipping off high railings and jumping from rooftop to rooftop like Batman, street pole happens when a pole dancer uses her scary-strong shoulder muscles to invert her body on a traffic sign or some such vertical column.

This means that across all social networks, #streetpole is now code for “look at this amazing picture of me magically floating sideways on this stop sign, no big deal.”

On Instagram, the hashtag #streetpole brings up around 24,000 photos of female and male athletes doing buff stuff on everything from tree branches to subway poles and volleyball nets.

Street pole pics frequently pop up on Pinterest, too, with dozens of boards dedicated to the urban art of street poling. And on YouTube, street pole videos show dancers from countries all over the world taking over local light fixtures, scaffolding, and playgrounds to show off their skills.

In 2013, contestants in town for the annual Miss Pole Dance competition even took over the streets in a sort of upside-down poling flash mob:

Most pole dance competitions take place indoors, where Olympic-level tricks and routines are performed on extra-tall stage equipment. But street pole is quickly becoming its own separate art form—in the same way that parkour broke off from gymnastics and skateboarding to became a full-fledged sport.

In New York City, subway pole dancers are most frequently young men of color who have taken pole dance into their own hands, mixed it with breakdancing and other hip-hop derived forms, and created a poling subculture called “Showtime” dancing. Showtime crews—with names like Fly Stylz Crew and the Float Masters—are so prevalent on local subway cars that the city has created efforts to curb them, including posting official subway car warnings against pole dancing and funding projects sponsored by dance companies aimed at getting Showtime dancers out of the subways and into parks and performance venues.

Both Showtime dancing and #StreetPole have taken pole dance from the strip club stage to the street, opening up the art form to dancers of any gender and age—and offering a challenging workout to anyone who doesn’t want to (or can’t afford to) pay upwards of $30 for a pole dancing class at a local studio.

Street pole has become so prevalent, it has already caused controversy in some places like New Zealand, where damaged street signs were blamed on “local prostitutes” in 2012. In Ocean City, Maryland, in 2014, locals complained about a pole dancer who performed her acrobatic routines outdoors on the beach boardwalk, prompting the local mayor to announce that all street performers were protected by the First Amendment as long as they weren’t breaking any other laws.

The ACLU has previously filed lawsuits on behalf of street performers to assert their First Amendment rights: In cases concerning performers in Nevada, Hawaii, Washington, and other states, the free speech law organization backed magicians, costumed characters, and other buskers who were stunted by local police and city regulators.

#Streetpole, it seems, is here to stay. As long as you’re fully dressed, of course.