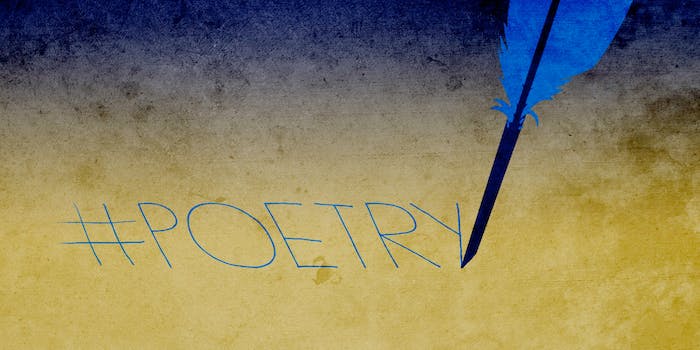 Poetry is having a renaissance on social media

Shorter than a personal essay, but just as evocative in times of tragedy.

As millions mourned last week’s massacre in Orlando, poems expressed the grief of a nation. Hamilton star and composer Lin Manuel-Miranda read his own sonnet at the Tony Awards commemorating the victims of the shooting. Poet Maggie Smith’s “Good Bones”—a poem about giving optimism to children while also knowing how dark the world can be—gave voice to many on Facebook and Twitter struggling to find hope. Patience Carter, who survived the shooting herself, wrote an emotional verse about the guilt that surrounds survival and the realities of witnessing such violent deaths firsthand.

It seems poetry is commanding a larger and larger role in public life—despite its association with angsty teens and your high school English class. And amid the egos, feuds, and bickering that can often dominate social media, poetry has become a common sight—a bright light even—across our news feeds and timelines as a means to process emotion.

BuzzFeed’s new Reader section has featured work by poets like Patricia Smith and Denise Duhamel. Popular sites like The Awl, The Baffler, and The Toast regularly include poetry. Somali-British poet Warsan Shire became a minor celebrity after being heavily featured on Beyonce’s Lemonade. Poems about everything from disability to body hair to rape have been shared countless times, introducing untold millions to the potential of the art form.

Such developments come at a crucial moment for poetry as a business. Despite these viral successes, readers and traditional publishers are drifting away from verse as a worthwhile effort. Even big hitters like Billy Collins and Wendell Berry struggle to make a dent against larger blockbuster books. Indie publisher Reb Livingston, in a brutally honest blog post, described publishing poetry as “a thankless job” and admitted “very few people, including poets looking to be published, buy many poetry books.” And according to the Census Bureau’s most recent Survey of Public Participation in the Arts, the portion of Americans who claim to have read a poem in the preceding 12 months dropped from 17 percent in 1992 to under 7 percent in 2012.

But even if the industry is not seeing a resurgence, the viral successes and websites’ investment in poetry means there is something about the environment of social media that is clearly feeding a public appetite for verse.

“Standing on a stage and reading a translation of your innermost thoughts puts you in an intensely vulnerable situation. Social media does the same, for better or worse.”

The most obvious reason is also the most cynical—poems are short. As our collective and personal attention spans dwindle into nothing, a few stanzas of a poem can express the same ideals and emotions as a lengthy personal essay or even a song—but in a format far more friendly to social media. Not all poems are concise, obviously (Claudia Rankine had a minor bestseller with her book-length response to the death of Trayvon Martin titled Citizen: An American Lyric). But poems typically manage a lot in very little space, making for easy reading and sharing.

Deeper than length and format, however, are the content similarities between social media and poetry. This isn’t to say that social media should be simply valued as “found art” (though, here’s a site that will transform your Twitter feed into a sonnet), but that users and poets also share a core mission: to connect with others by making their fears, desires, and struggles as public as possible. It’s one of the things that makes poetry readings so captivating; standing on a stage and reading a translation of your innermost thoughts puts you in an intensely vulnerable situation. Social media does the same, for better or worse, which makes it the perfect home for poetry and widens the audience looking for such a tool.

Before things turned sour, this vulnerability was the ethos of Alt Lit, a larger artistic movement that was popular a few years ago and capitalized upon the confessional nature of social media. Though Alt Lit, like poetry itself, was hard to define, it was typically characterized by blunt, low-effort writing resembling the casual tone of a Twitter feed or Facebook post (examples include Megan Boyle’s “How to Be Alone” or “Exactly What I Want” by Tao Lin). Alt Lit was often ridiculed for being pretentious millennial drivel, and when a sexual abuse scandal erupted in 2014, it alienated many women from the zines and blogs that had cropped up around the community, and many editors left the scene as well.

So perhaps the void left in Alt Lit’s demise has spawned what the New Yorker’s Kenneth Goldsmith calls “Post-Internet Poetry”—poetry which “uses the web while downplaying or taking for granted its influence.” In the introduction to his most recent collection of such work, poet Harry Burke promised to “look beyond fetishising the digital age and its ‘revolution,’ instead seeing what’s occurring now as a careful and important negotiation with what has gone before; a reworking rather than a rupture.”

Which is ironic, since the digital age he decries is giving poetry the same purpose and meaning it held for previous generations. Social media doesn’t merely give everyone a platform—though it certainly does that. It also gets people used to the idea of working out conversations and details about their life they might otherwise have never translated into the written word. Though we share, read, and write poetry differently than we tweet, we do it for the same reason.

This became immediately apparent to anyone watching reactions to the Orlando tragedy and its fallout. The shooting created a crossroads between otherwise disparate points and ideas—LGBT rights, gun rights, Islam, terrorism, mental health, immigration, and the acerbic nature of Donald Trump all converged on one horrific moment in our national debate. It’s not just politics that unfolded; it was an extension of the anger everyone feels of having to witness such horror over and over again and, against all desire not to, accept it as a mere fact of living.

Which is exactly what Maggie Smith spoke to in “Good Bones.” It’s what Patricia Lockwood spoke to in “Rape Joke,” and Jabari Asim in  “The Talk.” It’s what the thousands of poets who write under the hashtags #poetsontumblr or #poetsofinstagram hope to do—connect through the fog of modern life with a format both ancient and constantly reinvented. Social media can make us more artificial, more practiced and rehearsed in how we want others to see us. But it also forces its users to encapsulate something about ourselves in a way that others will understand. It provides us with the tools and parameters we need to make ourselves knowable to others. If that comes in the form of sharing poems written by others, all the better.