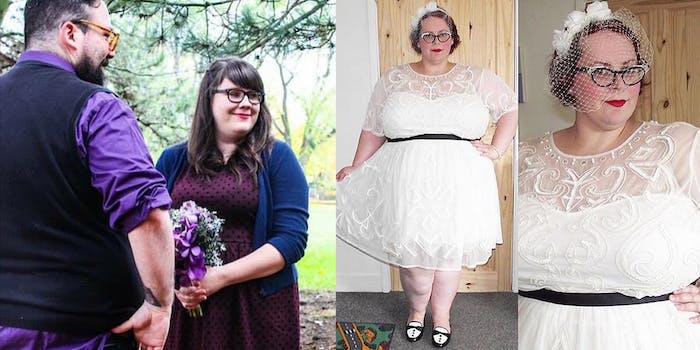 Ignored by the wedding industry, plus-size brides inspire each other online

'Having a full range of wedding attire available to fat people should not be an issue, but it is.'

When the Scottish blogger behind Lolly Likes Fatshion got engaged last February, she suspected that as a plus-size bride, she’d have trouble finding wedding inspiration. And she was right.

“Google ‘plus bride/fat bride’ and most of the photos that come up are fat jokes,” Lolly told the Daily Dot. “Trying to find actual plus-size bride photos for inspiration was not easy … It is not news that plus/fat people get married, so why was it so hard to find photos of them?”

Eventually, she decided to take matters into her own hands: Lolly reached out to her followers and social networks, calling for other plus-size brides (and grooms) to share their wedding photos and stories online. In Nov. 2015, she launched her “105 Fat/Plus Bride/Groom Photos” series with a blog post and YouTube video featuring the images she received.

Every week on “Wedding Wednesday,” she publishes a profile of a different plus-size couple (opposite-sex couples, but same-sex couples as well) about their nuptials. Each couple shares their typical romantic, how-we-met tale, along with details on where and how they found wedding attire in their size. Just as Lolly expected, similar sentiments echo from many of the brides and grooms:

‘”I did feel a lot of pressure to lose weight from those around me. People were always asking me what diet I was on, presuming I was ‘shredding for the wedding.'”

“I had a lot of anxiety growing up about finding a nice, formal gown for such an occasion.”

“Because I was plus-sized, I knew my dress shopping experience wouldn’t be what I dreamed of as a little girl. I love the dress I got, but I definitely would say I settled because I knew it would be a long process to find my ‘dream’ dress.”

“It was a little overwhelming.”

In such a daunting climate, Lolly hopes she can inspire plus-size brides- and grooms-to-be with her collected images while also prompting a conversation about size diversity in the wedding industry. “Positive visibility is so important for plus/fat people,” she told the Daily Dot. “It needs to be seen that fat people are just like smaller people. We love, get married, have sex, have families. We are beautiful and have the same right to a perfect day as anyone else. Having a full range of wedding attire available to plus/fat people should not be an issue, but it is.”

Jenn Clegg of Portland, OR, one of the “Wedding Wednesday” brides, told the Daily Dot she was just as disappointed as Lolly while she began to plan her wedding. “… [I]t’s really discouraging because you’re looking at bridal magazines, going to bridal shows and shops and it’s just like, ‘Where do I fit into this? How am I even going to make this happen?'” she said. “You don’t have anyone or anything to look to, so you’re just trying to piece it together by yourself.” 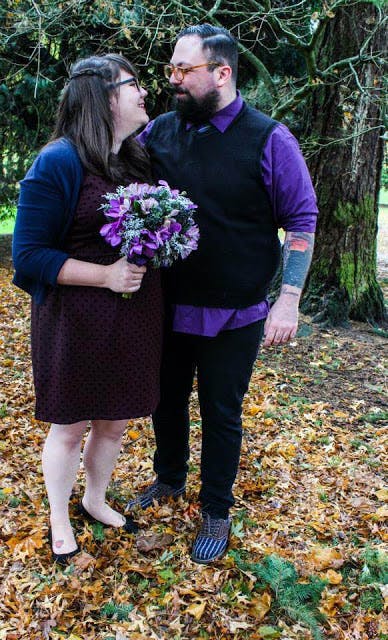 Clegg continued, “It’s particularly upsetting because you’re planning what’s supposed to be the biggest and most important day of your life, so you’re already overwhelmed, stressed and hyper-self-conscious because you want everything to be perfect.”

Not only does wedding media primarily share images of straight size individuals, it also actively encourages brides- and grooms-to-be to drop some pounds before the big day. “Couples getting married are under an incredible amount of pressure from the industry to lose weight,” Emma Brown of the UK, another “Wedding Wednesday” bride, told the Daily Dot. “All of the wedding mags and fairs have adverts [and] vendors pushing various weight loss fads and [dictating] to people how they ‘should’ look and what they ‘should’ wear!” As Brown and the others pointed out, few—if any —of those suggestions fall in the plus-size realm, making it especially difficult for larger folks to find guidance and support. 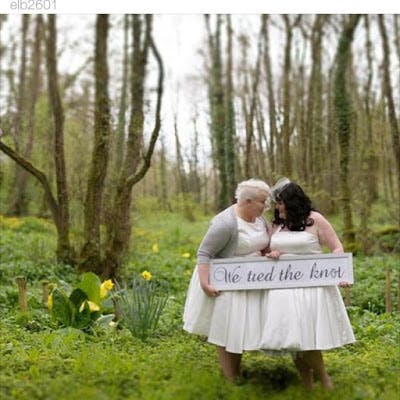 That’s why Clegg jumped at the opportunity to participate in Lolly’s series. “What Lolly and this series have done is …. [show] people who aren’t a part of that small, society-accepted group do fall in love, get married, and find lots of happiness,” she said. “That is something that is super righteous and important to have in this world.”

Bobbi Olson from South Carolina is especially grateful for that message, which she received not only as one of Lolly’s readers but as another of her featured brides. “It was really special to me to be featured,” she told the Daily Dot. She continued:

“One thing that really stressed me [out] about my wedding day…was how people view my husband and [me] together. As a woman, being larger than your spouse is totally taboo. It’s something that I can honestly say I have never seen in a magazine or television show, or really featured in the media in any positive way at all…There are so many things that society says that I can’t do, but Lolly’s blog helps break those walls and prove that we can.”

Lolly has been loving her part in all of this. As she prepares for her own 2016 wedding, she said she is benefiting from her readers’ positive stories as much as they’re benefiting from her posting them. “This is a journey and I hope to learn many inspiring things from these couples over the next year,” she explained. “I am inspired by their openness and how they are happy to share their stories with me and my readers.” 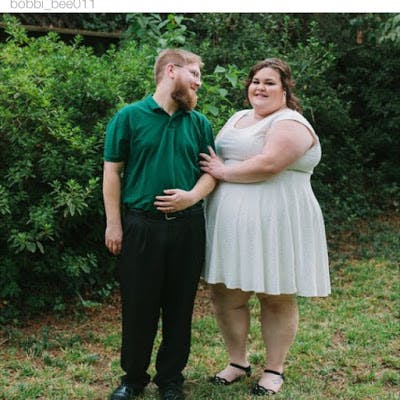 Appearing as a blushing bride on Lolly’s blog served as an important reminder of her beauty and self-worth, Olson recalled. “Your wedding day is likely to be one of the most incredible and memorable days of your life, and I can say from experience that all of the anxiety and stress I felt beforehand—worrying about finding a dress, about being judged for my choice or being larger than my husband—all melted away in the heat of the moment,” she said.

Ultimately, Olson’s wedding day “could not have been more perfect,” she said. And she wants other plus-size brides-to-be to know that everything she felt—happy, loved, beautiful,—is possible for everyone.