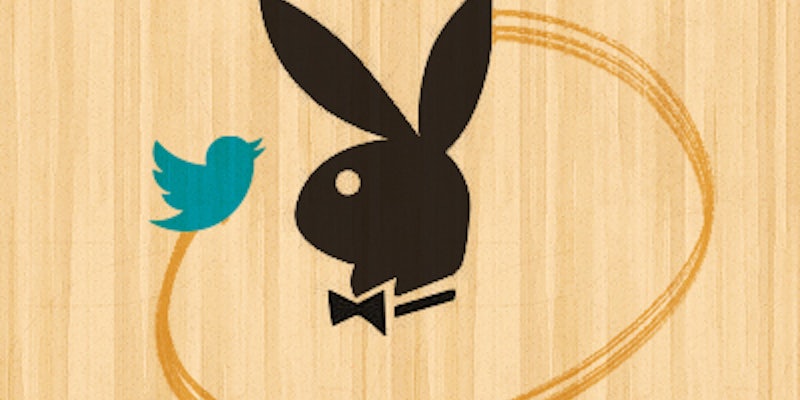 Beneath the covers of Playboy’s #FriskyFriday

The Daily Dot catches up with the curators responsible for Playboy’s sexy, stimulating, and sometimes NSFW photo contest.

Imagine having a Twitter account so popular that thousands of women literally tear off their clothes just to be retweeted by you.

That’s the case with the official Playboy Twitter account, one of the prized pieces of the men’s magazine social media arsenal.

Over the magazine’s storied 58-year history, founder Hugh Hefner has had a penchant for plucking beautiful women out of relative obscurity and turning them into centerfold stars. That search has gone social with #FriskyFriday, a weekly Twitter campaign where proverbial girls next door are encouraged to tweet tasteful photos of themselves in hopes of building their reputation and joining the Playboy family.

“We love that concept,” Playboy creative director Landis Smithers told the Daily Dot. “We’ve reached out to a few girls but nothing has actually led to a pictorial in the magazine. It’s completely possible because it is very much the heritage of the brand to find real girls. They can come from anywhere. We keep that open.”

Playboy’s #FriskyFriday campaign was kicked off by Playboy’s social media team and Hefner’s girlfriend Shera Bechard in December 2010, after she started tweeting sexy photos of herself on a weekly basis to her 79,000 followers. From there, the hashtag grew organically, Smithers said.

“Other Playmates joined in and it took on a life of its own,” Smithers added. “We’ve made a concerted effort with the brand to engage more directly and encourage the conversation. We’re reaching a point now where we’re getting tens of thousands of people joining the account on Friday.”

Since April, Playboy has collected more than 131,000 followers and, in the last month alone, #FriskyFriday has been mentioned 678,000 times, according to statistics from Topsy. Each Friday, Playboy’s three-person social media team, led by chief marketing officer Kristin Patrick, combs through each #FriskyFriday submission and ranks the top three photos. The woman don’t win anything monetarily, but the exposure could prove fruitful.

“The think that the great thing about social media and the Internet is that anybody can be famous,” she said.

Patrick and Smithers chatted with the Daily Dot about what makes a photo worthy of #FriskyFriday, the future of the brand on Twitter, and what it takes to run Playboy’s Twitter.

Daily Dot: How do you determine what is the best #FriskyFriday submission?

Landis Smithers: We have a brand standard for what we believe is Playboy beautiful. I think it’s a combination of the look and feel of the woman and how they shoot themselves. It’s also a combination of sexy, not trashy—bringing a sense of humor to things, and showing themselves in the best light. A great thing about our best engagers—most of them being Playmates—they understand that. These are girls who know how to photograph themselves and look their best in a semi-amateur sense. We don’t want professional photographs. It’s got to be something that has a sense of real life to it.

LS: As much as we’d like to be off the cuff and reactive to everything, that’s not the best way to keep a brand this massive moving forward. It’s a blend. We have a series of guest editors who come in and help curate things that we find most appropriate for lifestyle. We also leave space open to be reactive to topical events and to put the Playboy spin on things.

We like to keep people guessing. Yes, we engage with the Playmates by tweeting at them and sharing their content. We also found that an amazing quote from an iconic man can go wildly viral for us.

DD: How does one get a job curating Playboy’s Twitter?

Kristin Patrick: It’s not just somebody who wants to come and write things and respond to world and be creative. We take a very strategic approach to everything we tweet out. It has to be written in our brand voice, with our brand sensibility, with our brand sense of humor. Anybody we recruit to the company has to understand that.”

DD: What does the future for Playboy on Twitter?

LS: One of the things we’ve been working on is basically finding out brand voice and honing in on the core essence of what makes Playboy Playboy. A couple of months ago we took a different approach to our social media presence and wanted to broaden our content—the most over-the-top luxury resort, the cooled gadget, the cost of the gentleman’s lifestyle and things that drive him. Also on the girl content side, we’ve taken a more curated approach. For instance, we don’t post just an endless stream and clog up people’s Facebook timelines. We post the best of the best.

In terms of Twitter, we’re always open. Part of what we’re looking at is what feels organic, what feels most genuine and how don’t we replicate the same thing over and over again. We’re actually trying to streamline it in a certain way. We want to make sure that whatever we do has impact. It has to have meaning.