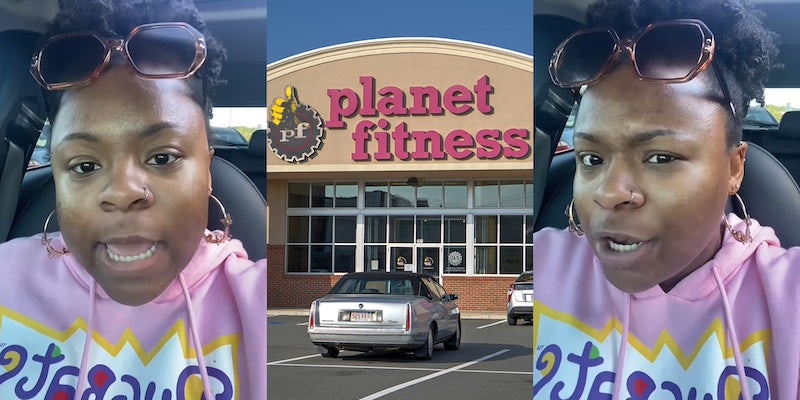 'Target had me there for like 2 hours and to have 2 interviews just for me to not get the job.'

A TikToker went viral after she shared her story about being asked to do multiple interviews while applying for a part-time job at Planet Fitness.

Job interviews can be an intense, sometimes embarrassing experience. But a lot of the time it’s just tedious and time-consuming, and that’s exactly what one TikToker complains about in her now-viral video.

In the clip, which has over 74,000 views, TikTok user Alexis (@smurflexis) recounts her experience in a stitched video that claims part-time job interviews are “public enemy number one.”

Alexis explains she already completed a job interview with the Planet Fitness store manager when he called her back to let her know that she did a great job. “But,” the manager allegedly said. “I want you to come in and do a second interview… with the assistant manager.”

“Pause. Why am I doing a second interview and why am I doing two interviews for a part-time position at Planet Fitness?” Alexis asks. On top of that, she also asks why she’s interviewing again with the assistant manager since their superior already met with her and told her she had done well in the first round.

Alexis ends the video saying that she “didn’t even reply.” Many commenters sided with the TikToker.

“Part time has one thing and it’s the AUDACITY,” one user said.

“This is what most retail jobs make you do now,” another said.

Others part-time job applicants shared their own experiences with multiple job interviews. “That’s how it was at Target they had me there for like 2 hours and to have 2 interviews just for me to not get the job,” one person share. Alexis replied, saying, “All that and y’all probably knew halfway through the process it was gonna be a no.”

“These companies doing way too much like I only need this part time so I can have more spending money,” one user pointed out. “Exactly,” Alexis agreed. “Y’all got a position that needs to be filled and I got candles to buy.”

There were a few users who seemed to disagree with the TikToker’s stance on multiple job interviews for part-time work. “I mean I get both sides,” one commented. “I think they do that to make sure you will be a hard worker and not just job hop.”

Another argued that the manager was actually being more democratic in the hiring process by involving his assistant. “Because the manager isn’t a totalitarian and values the input of the assistant manager,” they said, to which Alexis responded, “And that’s fine but if that’s the case have the assistant manager already present at the interview. 2 interviews for a part time job is OD.”

The Daily Dot reached out to Alexis via Instagram direct message.