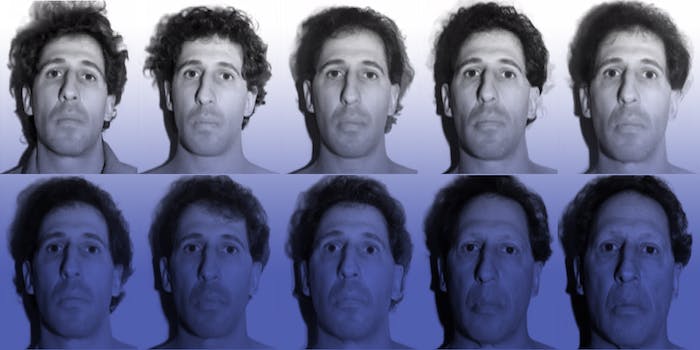 This photographer photographed his face every day for 27 years. Just don't tell him the images are "selfies."

When Karl Baden first set up his tripod and camera to take a picture of himself, the term “selfie” was still years, even decades, away from being a thing.

For 27 years, Baden, a photography professor at Boston College, has gotten up everyday, gotten ready for work and then stood in front of a camera for a photo. There is never anything unusual about the image, in fact he’s been using the same technique since Feb. 23, 1987 in order to maintain consistency for his extensive project, called Every Day. “The camera is always set and focused at the same distance,” Baden wrote in his artist statement. “When taking the picture I try and center myself in the frame, maintain a neutral expression and look straight into the lens.”

Baden said the project looks at different artistic factors, including morality, incremental change and obsession. On the occasion of starting his 27th year of standing in front of the camera, Baden spoke with Boston Magazine about the project. He said he first came up with the idea of a selfie project in the 1970s but a close friend shot it down. A decade later, he resurrected the concept and started taking pictures on Feb 23, 1987.

While posing for a photo everyday for almost three decades may sound like a major undertaking, it’s become part of his daily routine and he doesn’t plan on stopping anytime soon. “I’ll stop when I’m dead,” Baden said. In fact, over the years, he has only missed one day, Oct. 15, 1991. On that day, Baden was quickly trying to rush to work and forgot about taking the picture. At work, he promised himself that he would take the photo later, but it never happened.

Over the years, Baden’s work has been featured in galleries and museums, but its biggest audience has been the Internet. Besides posting photos to his personal blog he also posted a video that shows him aging nearly 27 years.


Despite current popular nomenclature, Baden says he has no interest in calling his photos “selfies.” In fact he told Boston Magazine that the project is a “distantly related topic” compared to more recent self-portrait fads.