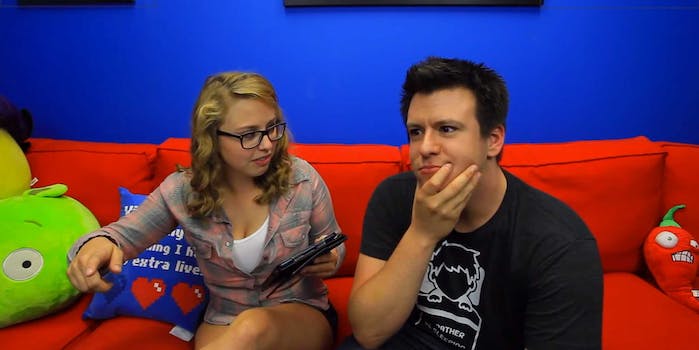 Is Philip DeFranco a sexist or just misunderstood?

The popular YouTube host had to clarify some comments he made about women in an interview with Laci Green.

That’s what the YouTube juggernaut emphasized when he addressed the criticism and messages he received after he voiced his opinions on feminism during an episode of Sex+.

He guest starred in a video with sex-positive vlogger Laci Green, where she grilled him on everything from pornography to whether he would ever try a strap-on.

It was his views on feminism, however, that got the Internet buzzing. When asked during Green’s “Either Or” segment whether he identified as a feminist or a Men’s Rights Activist. He sided with feminism and called himself a “sexist feminist.”

“I think a woman has a right over her body, she can do whatever the hell she wants with it,” DeFranco said. “But, I know deep down inside I’m looking at most of them as sexual objects.”

Green asked if he ever tried to fight that mindset and view women as people, and he replied that “when a human is my friend, then she is a person to me.”

Viewer responses were mixed, and Feminist As Fuck noted that what DeFranco said could be dangerous because a lot of people look up to him.

DeFranco directly responded to the criticism in a blog post on Monday. He called himself flawed and good-intentioned and said that he worded things very poorly. He clarified his views on women while emphasizing that the women he doesn’t know are still real women.

“I may view women in a sexual manner but I won’t apologize for that,” he wrote. “When I look at a woman like Laci I see her as both sexually attractive but most notably an incredibly passionate, strong, and intelligent person. I would never know the latter if I had never talked to her.”

Feminist As Fuck responded to DeFranco’s post and said that while she doesn’t think that DeFranco is a bad person for his views, it isn’t something people should ignore.

“It means we should be informed about people and understand that they are – people,” the blog owner wrote. “I guess my point is that EVERYONE does problematic shit in their lifetime.”

In part of a larger conversation about women on YouTube, Laci Green told the Daily Dot at VidCon that there’s still hope for DeFranco to change his shocking views about women:

“I said to him, ‘Are you seriously telling me you don’t see women as people? That’s the most fucked up thing that I’ve heard all summer.’ But he was being honest. He told me that he knows it’s wrong, and he doesn’t like that that’s how he feels. You get brownie points for being honest, but you still literally just said that half the world is not a person to you. There’s hope for Phil though. I feel it.”