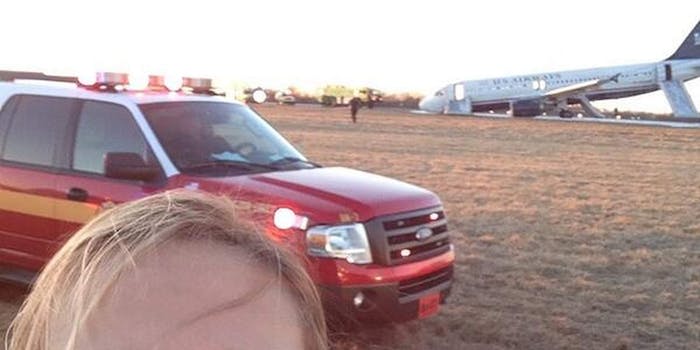 Your plane just crash-landed and the flight crew hurriedly evacuated you and 148 other passengers. What is your first reaction?

Your plane just crash-landed and the flight crew hurriedly evacuated you and 148 other passengers. What is your first reaction?

Take a selfie, of course.

Hannah Udren’s US Airways flight from Philadelphia to Fort Lauderdale made it several feet off the ground before bouncing back to the runway. Its front landing gear collapsed and the plane skidded to a stop at the edge of the runway through a sea of sparks. Flight crews activated the plane’s emergency chutes and managed to get everyone to safety.

As Udren ran from the airplane, she pulled out her phone and recorded her progress.

Once she was at a safe distance away from the scene, she snapped and tweeted additional photographs.

so my plane just crashed… pic.twitter.com/X51BLwa5PS

Udren’s “selfie” picture immediately made its way around the Internet, being retweeted over 3,600 times and sparking reaction.

Best selfie ever. Glad everyone safely made it off the plane. @han_horan: so yup pic.twitter.com/rmM5w0lvUy

Udren’s experience is a perfect example of the self-centric reaction people have in today’s technological age. No longer is it enough to simply record history; we must prove to the world that we were an active part of it, that we were there.

Sure, people out there are criticizing Udren’s choice to take a selfie during such a crisis. However, as Twitter user Scott Bixby said…

Oh shut up you guys we’d all do this RT @han_horan so yup pic.twitter.com/9ijk5jg6M7