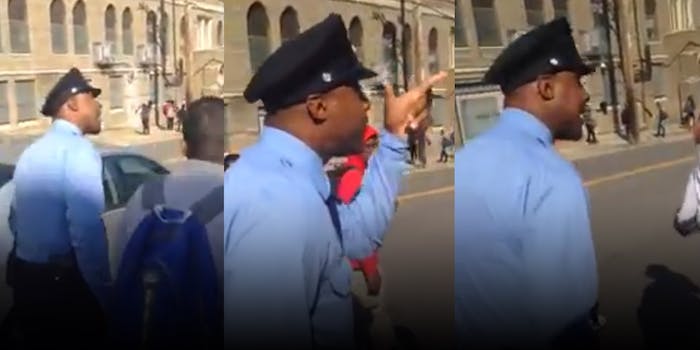 “Next time you look me in my fucking eye, I’ll beat the shit out of you.”

It’s the kind of language you might expect to hear in rowdy bar on a Friday night—not coming from the lips of a police officer, in broad daylight, directed at a teenager apparently minding his own business.

An unnamed Philadelphia cop has been shown in a recent video using some very strong language while talking to a local teen. The context of the footage is unknown, but it’s hard to imagine a situation in which the officer’s language would be appropriate. “Big man, is there a problem? Because I notice you keep trying to make eye contact with me,” says the officer. After an inaudible response, he continues: “Keep fucking walking, and next time you look me in my fucking eye, I’ll beat the shit out of you. So get the fuck outta [here]!”


NBC Philadelphia reports that the officer, who is part of the 19th District, will face disciplinary action for his remarks. “The video does not reflect well on the officer,” a Philadelphia police official told the news station.

”I have no doubt he had good reason to be exasperated, but you have to maintain your professional demeanor.”