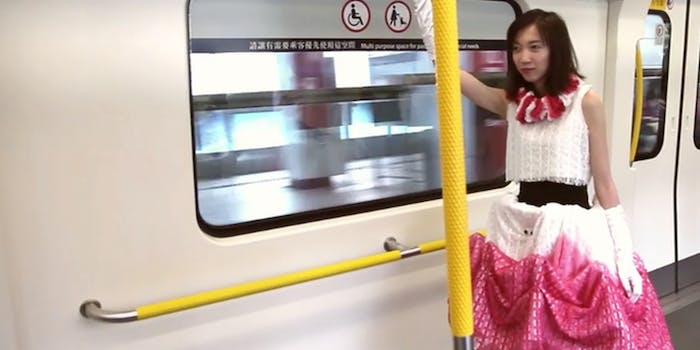 This dress comes with its own defense mechanism.

Kathleen McDermott is a Hong Kong-based artist who’s taken the issue of women and personal space to its logical end: She’s created a dress that takes care of it for you.

A video showing McDermott’s “Personal Space Dress” in action was released last week. It’s powered via the open-source platform Arduino, and sensors on the front and back of the dress detect when someone is too close to the wearer. The dress then inflates, mimicking the defense mechanism of, say, a puffer fish. It also emits the sound of something like a robot fart, so people will be doubly wary. Yes, this could get out of hand on a packed subway.

It’s part of McDermott’s Urban Armor series, “a collection of DIY wearable electronics that helps women exercise control over their personal/public space.” A few months ago, she released the “Auto Filter,” a scarf with a built-in pollution sensor. A few days ago, she unveiled “Miss-My-Face,” a veil that shields the wearer’s face from CCTV and surveillance cameras.

These wearables aren’t meant to be mass produced, though McDermott has included instructions for creating your own with Arduino. Rather, as she explains on her website, these are “playful” statement pieces that critique how the ascendance of wearable technology impacts the physical world:

The series arose partly out of my concern over the persistence of ideologies asserted at women in public space through advertising, architecture and socially normative behavior. I began to look for ways women could take more ownership over their personal space in public.

At the same time, I noticed trends in wearable technology seeming to target mostly wealthy, young, professionals, and focusing on functions such as data collection and social networking. I wanted to explore how wearable technology could impact a person’s physical world, and help the wearers augment their personal expression and agency in public space.

Wearable tech and high fashion have started to dovetail, but McDermott adds that she wants these pieces, ultimately, to become “instructables”:

As I develop the series further, I want to gain a broader range of perspectives. Women of different ages, races, and economic groups experience public space differently, how would they use technology to augment their experience of public space, given the opportunity?

Another question: What happens if two personal space dresses come in close proximity to each other?