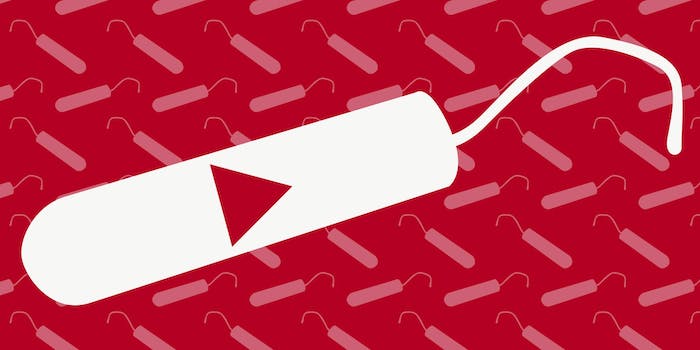 6 YouTube videos that will explain women’s periods for you

From pregnancy scares to toxic shock syndrome, we've covered it all.

There’s no question that menstruation can be mystifying. Once upon a time, the bleeders amongst us only had big sisters or friends to ask about tampon absorbency or whether a pad can be flushed (answer: no). But anyone who ever puzzled over an instruction leaflet, furrowing their brow and tentatively putting one foot up on the side of the tub, will envy today’s generation of adolescents. They can simply click on YouTube to find out how to put a tampon in—and lots of other important details about periods, too. Here are six clear and informative videos that will answer everyone question you have about menstruation:

“Why do women have periods?”

A new TED Ed video released this week explains why humans—along with monkeys, apes, bats and elephant shrews—are among the very few species of mammal that menstruate.

The Sexplanations video breaks down all the phases of the menstrual cycle with the resourceful use of a red pashmina and a piece of dried pineapple. Even though I paid attention in all my school biology classes, I don’t think it ever occurred to me that in the event of pregnancy, the lining of the uterus turns into the placenta.

“9 menstruation myths”The ladies at Stuff Mom Never Told You debunk persistent notions about menstruation such as: a woman can’t get pregnant if she’s menstruating, women on their periods attract bears (thanks, Brick from Anchorman) and the idea that woman’s periods synchronize with each other. Wait, that last one’s not true?

“What happens when you leave your tampon in too long?”

We’ve all heard a scary story or two about toxic shock syndrome. Discovery News explains how and why TSS can happen, along with some interesting factoids about tampons. Did you know the ancient Egyptians used their own version of tampons made of papyrus, or that the modern tampon debuted in the 1930s?

“12 reasons why you missed your period”

…apart, obviously, from the one that has the power to strike fear into the heart of every unsuspecting woman. Once you’ve ruled pregnancy out, what other occurrences in your life might stop Aunt Flo coming to town? Here’s PregnancyChat with all the factors that can affect menstrual cycles.

“The menstrual cycle and your body’s natural sign of fertility”

The cervix doesn’t get a lot of press, unless it’s to remind women to go for their pap smears. However, it’s a part of the female reproductive system that does a lot of nifty things. For example, did you know the cervix produces three different types of mucus, each with a specific function, to aid sperm in its journey to the egg? This video from The Billings Ovulation Method, which promotes “natural fertility management,” shows how the hormonal changes in the menstrual cycle affect the cervix.