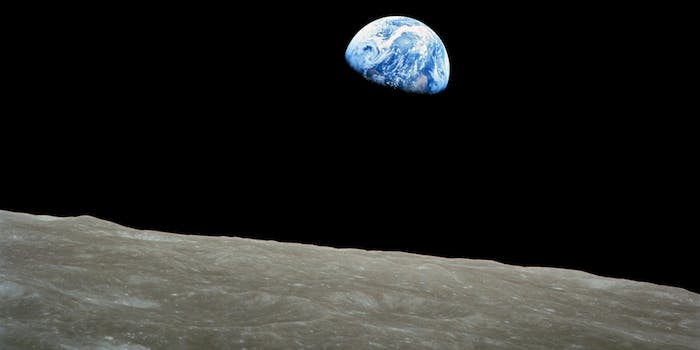 Penn State students are crowdfunding a mission to the moon

Though there is a $40 million carrot dangling for them on the moon's surface, they have to raise all the necessary backing to get there by themselves.

For many crowdfunded ventures, donors usually settle for getting their names listed somewhere in the back of a hand-stapled program. If they’re lucky, maybe they’ll get a shoutout in the credits of an indie game.

But if you kick in a hundred bucks to the project under way by some Penn State students, you may just end up with a personalized message on the moon.

Students and faculty at Pennsylvania State University are taking on what just might be the most ambitious crowdfunded project of to date. They’re seeking to become the first non-government entity to land a spacecraft on the moon.

The project—dubbed Lunar Lion after the university’s mascot—is Penn State’s bid to win the Google Lunar X-Prize, an innovation competition designed to spur a privately funded return to the moon. The contest will award $40 million to the first private team that can figure out a way to send an unmanned spacecraft to the moon that is then capable of traveling 500 meters on, above or below the lunar surface and sending back two broadcast transmissions.

Only three governments—the United States, Russia, and China—have sent objects to the moon. The United States is the only country to have ever landed a human being on the moon, having done so most recently in 1972.

“More than half of the world’s population has never had the opportunity to view a live transmission from the lunar surface,” the contest website reads. “The Google Lunar X-Prize aims to create a new ‘Apollo’ moment for this generation and to spur continuous lunar exploration.”

But for those working on the Lunar Lion project, the prize money is a secondary motivator. Michael Paul, a space systems engineer at Penn State’s Applied Research Laboratory and the faculty director on the project, said the program is a one-of-a-kind learning and research opportunity for students.

“I was charged with trying to find a way for Penn State to increase its presence in the space industry,” Paul told the Daily Dot. “We looked at pursuing involvement with NASA missions, but realized that funding doesn’t come from the same places it came from in the past.”

In recent years, there has been a substantial shift in how space travel is financed. Though flight beyond Earth’s atmosphere was once thought to be the sole domain of lavishly funded government agencies, that paradigm has shifted radically in the last decade since the initial X-Prize was awarded to the first privately financed, suborbital, manned space voyage. Now even NASA – bereft of its shuttle program – relies heavily on the private company SpaceX to run unmanned supply trips to the International Space Station.

With this changing economic climate in mind, Paul, a veteran of NASA’s MESSENGER mission to Mercury as well as other unmanned probe missions, decided the university should take a do-it-yourself approach to gaining a toehold in space.

The university has been working on the project since 2011. Much of the early work has involved designing a prototype spacecraft and developing a business plan for the project. The business plan is critical. Though there is a $40 million carrot dangling for them on the moon’s surface, they have to raise all the necessary backing to get there by themselves.

Lunar Lion leaders have already sought out traditional science and university donors, but to raise the required funds, the team is turning to another concept as unique to the 21st century as private space travel: crowdfunding.

This week, the team began publicly raising funds on the aptly named RocketHub.com. They want to raise $406,536 (if you’re wondering why such a bizarrely specific amount, it’s because that’s the average number of kilometers between the Earth and the moon). As of this morning, they’d raised just over $19,600 from 166 donors, roughly 5 percent of their goal. This initial round of fundraising runs through Feb. 25.

As an incentive, the team is offering those who donate more than $100 the chance to have their name or a personal message etched into the spacecraft hardware. Those making smaller donations will be allowed to compose a message that is beamed back to Earth by the spacecraft during its mandated broadcasts.

“Think about having the opportunity to send a message to the moon that will last for eons,” Paul said.

A core group of about 80 students is currently involved in the project. The next major step is to build the prototype spacecraft. The biggest technical obstacle they face is building the engines that will allow the craft to land softly on the moon, ascend from the surface, travel 500 meters and then safely land again—all while being remotely controlled. The Lunar Lion team has partnered with NASA research centers as they develop some of the technology, learning from the agency’s 56 years of experience.

Surprisingly, what may seem like the most challenging part of the mission—getting to space—is nearly secured. The university is working with Team Phoenicia, a company that serves as a middleman for those seeking to get an object into space and those with the necessary equipment to get there. The company organizes multiple groups with midsized spacecrafts to share common rockets for launch (think of it as something akin to taking a shuttle bus to the airport rather than your own cab). Paul says that dramatically decreases the average $70 to $100 million cost associated with launching an object into space when going alone. The Lunar Lion team has already begun paying for their spot on a rocket set to launch at the end of 2015.

That a team of college students could possibly be sending a spacecraft to the moon—the same feat NASA spent billions doing in the 1960s—may be hard for some to grasp. But in the age of Internet self-starters, no task seems beyond feasibility.

“I say ‘why not?'” said Joe Volansky, a Penn State grad student and the project’s communications director. “To be a naysayer is selling a lot of people short. I don’t think I’m alone in saying this is entirely possible for a university to do.”