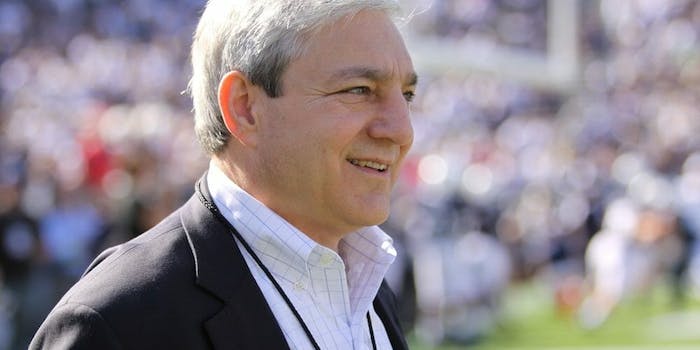 Prosecutors said Graham Spanier showed 'a stunning lack of remorse for his victims.'

Five years after former Penn State football coach Jerry Sandusky was sentenced to 30-60 years in prison after being found guilty of 45 counts of child sexual abuse, the school’s former president has finally received his punishment.

Graham Spanier, who was Penn State’s president from 1995-2011, was sentenced on Friday to two months in jail and two months of house arrest after his conviction in March on a misdemeanor charge of endangering the welfare of a child.

Spanier did not report an allegation made against Sandusky in 2001 that the former Penn State defensive coordinator had molested boys.

As CNN notes, the 68-year-old Spanier also will be on probation for two years and must pay a $7,500 fine.

In their sentencing memo, prosecutors portrayed Spanier, who was once one of the most-respected higher education leaders in the country, as “the ultimate decision-maker when it came to reporting Sandusky.” They also noted that Spanier showed a “stunning lack of remorse of his victims” and said he chose “to protect his personal reputation and that of the university instead of the welfare of children.”

Spanier has said he didn’t know Sandusky was a threat to children, but after he was found guilty, he said he regretted that “I didn’t intervene more forcefully.”

Said Judge John Boccabella: “These men are good people who made a terrible mistake.” But “why no one made a phone call to police … is beyond me.”