Global penis-size infographic is based on racist research

When you look at the hard evidence, the data just doesn't stand up.

According to a new survey of world penis size by Mandatory.com, a factual look at penis size offers a wake-up call for a universally size-obsessed culture.

There’s just one problem: The data in the infographic is largely the result of blatantly flawed methodology and horrifically racist research.

The Mandatory infographic is just one of many infographs in recent years that have attempted to divide the world in terms of penis size. According to Mandatory’s quick survey, the average world penis size is 5.5 inches. Out of the 80 countries referenced in the survey, the U.S. hovers near the bottom, clocking in at No. 61 with an average of 5.1 inches, while Congolese men of the DRC have the largest average penis length at 7.1 inches. 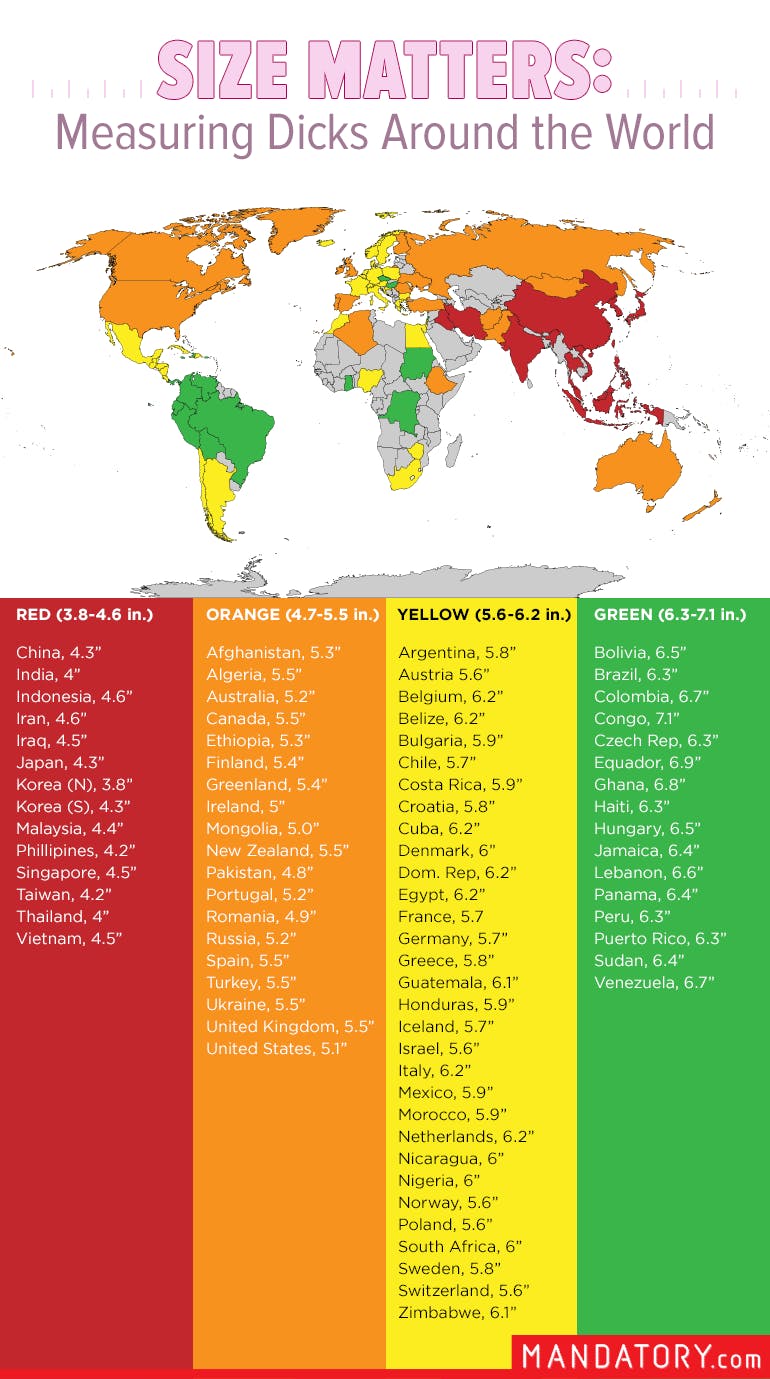 The attempt to generate a cross-section of global penis size involves looking at numerous previous infographics and surveys. But when we look closer, most of the, erm, hard evidence used to generate this and other global size charts turns out to be utter bollocks.

Most of the data used to generate “global” statistics about size comes from faulty or unreliable reporting. In many instances, the sources Mandatory and other websites used to generate statistics about international dick size relied on self-reporting or estimates given by men about the sizes of their own penis. In scientific studies, self-reporting is extremely unreliable, even when you’re not reporting something as highly fraught as penis size. Some studies have even shown that men perceive their own penises to be smaller than they actually are.

And there’s an even bigger problem. (Sorry.) Many of the research studies in the field have been built off the inherently flawed racist work of a researcher named J. Philippe Rushton.

Not only is this theory an obviously false stereotype, but it’s based on flawed research. In order to find arguments for his racist theories, Rushton cited everything from decades-old obsolete research to issues of Penthouse magazine. But as appalling as this might seem, his research has been built on and added to as recently as 2012, in a roundly criticized study from researcher Richard Lynn that used irrelevant studies on rats to argue that testosterone levels differed for men around the globe.

In both the Rushton and Lynn research, the happy middle between “most evolved” and “least evolved” was, of course, European and American societies. Psychology Today, in roundly criticizing both Rushton and the new theory, dubbed this the “Goldilocks Effect,” because of the way it positions white culture as the perfect medium between two extremes. How convenient.

One thing the Mandatory chart does make clear, apart from perpetuating racist myths about size, is that the global average really is smaller than most men think. One study, which lasted 60 years and included results from more than 50 international research efforts, concluded that the average penis size, regardless of country of origin, is 4.7 to 5.1 inches.

Proper self-measurements are taken from the tip of the penis to the base of the shaft. A quick glance at the popular Tumblr measureyourcock, dedicated to self-measurements, shows that most penises submitted fall into the average five-inch category.

So, for the record, all the racist jokes you’ve ever heard about penis size are still false and degrading stereotypes.

And trying to argue national superiority based on an inaccurate chart on the Internet makes you the biggest dick of all.