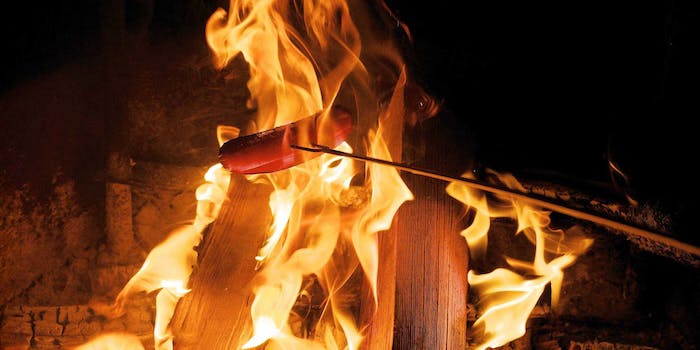 It's disturbing viewers think setting a man's penis on fire is a funny reaction to cheating.

A video of what looks like a woman pouring nail polish remover onto her sleeping boyfriend’s crotch, then lighting it on fire, is going viral.

In the video, the woman sets her boyfriend’s penis on fire; when he wakes up terrified, she yells at him off-camera that it’s payback for cheating with her co-worker. While the video is fake—similar to other staged stunt videos that tend to go viral—it’s disturbing people are making light of something that qualifies as domestic violence under any definition.

The video was made by Dominic Low, a viral video maker with a growing following and a series of comedic shorts that feature him driving with long acrylic nails, hanging out with twerking teddy bears, and making an ice cream sundae on a woman’s feet then eating it.

But the penis-on-fire video is unsettling. After all, retaliatory abuse like this happens in real life. For instance, in 2009, an Australian woman named Rajini Narayan was charged with murder after dousing her husband’s pelvis with solvent and setting him on fire while he slept. He died from the injuries, and the house nearly burned down. “I just wanted to burn his penis so it belongs to me and no one else, Narayan told prosecutors, “I didn’t mean this to happen.”

As recently as August 7, a Baltimore woman was hospitalized in serious condition after her boyfriend set her on fire during an argument.

Apparently it needs to be said that setting people on fire is not hilarious—it’s a serious crime. That said, we’re glad this video is a fake.