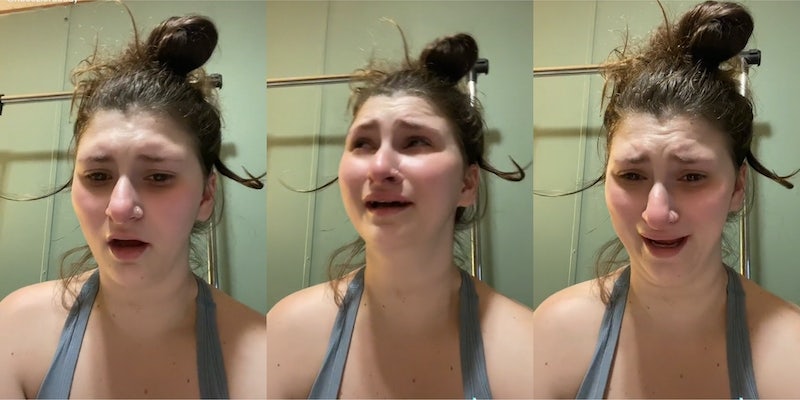 ‘For this tiny room with nothing’: Woman says she was paying 75% of rent for unit she shares with roommate without knowing

A woman cried in a TikTok video after finding out she was unknowingly paying the majority of rent for an apartment unit she shares with a roommate.

Kayla’s (@hooozierdaddy) video garnered 2.1 million views on the platform. “I just found out that I am paying, like, 75% of the fucking rent,” she tearfully says in the video. “What the fuck, for this tiny room with nothing.”

@hooozierdaddy Why is this shit happening to me ? #fypシ #fyp #foryoupage #OverwatchMe ♬ Wash. – Bon Iver

In a follow-up, she says she has been acting as her father’s caretaker after he had a series of strokes and that his apartment complex wouldn’t add her to his lease. She says that, because of this, they both had nowhere to live, leading her father to be checked into a long-term care facility and her to have to move in with a roommate, someone she has “known for a while,” she says. She says that since she has been taking care of her dad full-time, she has no money. “I am starting my job tomorrow, but I will not get paid on time to pay my rent on the first,” she adds.

She added GoFundMe to her TikTok profile to help with rent.

It seems as if some commenters cast the blame on the TikToker, according to a comment she left under her own video. “Y’all are acting like I knew how much his lot rent was,” she wrote. “No. I didn’t. Yes I read and signed a lease. But I didn’t know the full amount of his lot rent.”

However, those critical comments seem to have since been drowned out by supportive ones.

Some viewers shared that Kayla is not alone, as they have similarly been taken advantage of their roommates. “My roommate did this to me and when we confronted him he assaulted my other roommates mom,” one of the top comments alleges.

The TikToker is based in Colorado, she revealed in several comments when responding to viewers as well as in her GoFundMe. There, “the average rent for an apartment in Fort Collins is $1,840” according to Rent Cafe.

The Daily Dot reached out to @hooozierdaddy via TikTok comment.