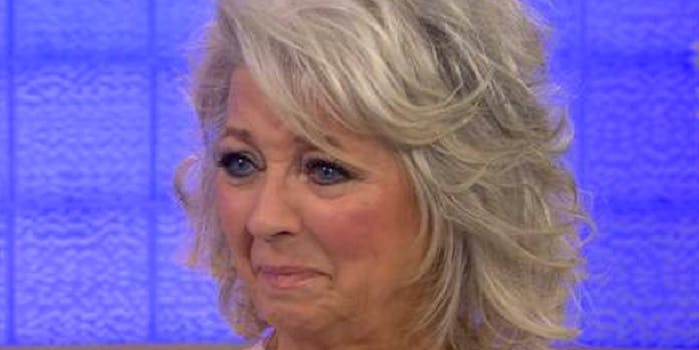 The saga of Paula Deen continues to divide fans after the Southern cooking icon appeared on the Today Show Wednesday morning.

Deen, who was originally going to appear on the morning show Friday, told Matt Lauer in an interview that she didn’t show up because she was overwhelmed and in a state of shock after the backlash over court documents revealing she admitted to using the N-word and said she wanted to throw a “plantation-style” wedding.

Her appearance Wednesday comes after she suffered not only criticism from fans but also the loss of two business partners: the Food Network and Smithfield Foods. Deen told Lauer she decided to appear Wednesday because she wants people to know what she believes and how she lives her life.

Lauer pressed Deen on whether or not she thinks her actions were fireable offenses, to which Deen responded no. When asked bluntly if she was a racist, Deen also responded in the negative. The cook appeared to get emotional during the interview but never took the opportunity to say she was sorry for her actions, only referencing her previous online apology.

The Today Show encouraged viewers to use the #PaulaDeenTODAY hashtag on Twitter to react to the interview and a look through the conversation shows that Deen’s appearance didn’t make much of a dent in what fans think of her. People are still firmly divided into two distinct camps, those who think her actions are clearly wrong and she should disappear from the public eye, and those who support her and think she should be forgiven.

Deen’s supporters also took the opportunity to attack how Lauer conducted the interview.

Check out this sampling of tweets below and join the conversation on Twitter by using the hashtag #PaulaDeenTODAY:

Matt went into that interview with an already formed negative opinion on Paula, goody way to stay non-biased Today. #PaulaDeenTODAY

#PaulaDeenTODAY seriously, she made a mistake calm the hell down. EVERYBODY has said something they wish they could take back.

‘I is what I is’ is not helping your case of trying NOT to look like an ignorant old southern fool. #PaulaDeenTODAY

#PaulaDeenTODAY Matt is a despicable example of a news anchor. No compassion and only aiming to rip a poor old woman to shreds.

#PaulaDeenTODAY That was a staged performance if I ever saw one. All that carrying on and NO tear ever fell through her heavy makeup.

#PaulaDeenTODAY good job Paula! I think it’s rediculous the way they have been treating u!

#PaulaDeenTODAY The “n” word is offensive. I don’t care if you come on TV crying alligator tears. She knows that what she said was wrong.