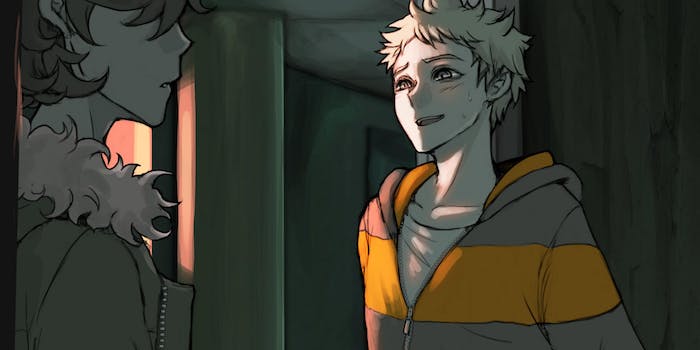 For one PAX East gamer, the scariest game on the show floor wasn’t Doom Eternal or World of Horror. It was West Falls, an adult visual novel by queer game development studio green solid.

Studio co-founder KV Hice told the Daily Dot that “99.9% of the people are responding pretty positively” to the game.

“The ones who aren’t are the guy who ran away from the spicy CG,” Hice added.

“I mean,” game developer Christine Love quipped, “it was a pretty spicy CG.”

West Falls is a boys’ love horror visual novel written by Hice and illustrated by green solid co-founder Ahvia. The game follows college students Sage, Cole, and Toma, three struggling paranormal vloggers searching for ghostly phenomenon on Toma’s insistence. “What happens when ghost hunters find what they’re looking for?” the game teases. As it turns out, it’s a lot of queer sex.

Hice and Ahvia, who are partners, work closely together to create a story with both nuanced characters and kinky sex scenes. Most commonly, this involves a Discord chat where Ahvia passes along tantalizing adult illustrations and Hice sees if they would make a good fit for the game’s script.

“We love horror, we love messy BL, so we were like, ‘OK, it’s time to make the game that we want to make,’ and just be messy and be unafraid about it,” Hice told the Daily Dot.

West Falls plays similarly to other adult boys’ love visual novels: Players advance through the narrative with a colorful cast of characters and choose branching narrative options along the way. But the game stands out thanks to its open embrace of the boys’ love genre. Hice and Ahvia unapologetically delight in the sexual tension between its male characters, whether soft and loving or more akin to “hatefucking.” Additionally, the game’s full release will explore a number of complicated sexual scenarios and fantastical kinks, Hice teased.

“I’m trying to approach this with a boldness, but it is kind of uncharted territory for me,” Hice said. “I’ve never put out any adult material, I’ve worked much younger in the past, so it’s going to be interesting to see how it turns out.”

While the demo this writer played did not feature any explicit sexual content, seeing a queer adult game on the show floor was a fresh breath for PAX East. The game was located in the Visual Novel Reading Room, an expo booth dedicated specifically to indie visual novel developers. A number of popular queer video games have been shown in the booth before, including Heaven Will Be Mine and Love’s adult game Ladykiller in a Bind.

Love’s professional connection to Hice is no accident. She not just led the Visual Novel Reading Room’s creation in 2017, she’s also a champion of queer adult video games across their subject matter. “We try to get a range of different games in the Visual Novel Reading Room. We don’t want it to just represent one genre, so West Falls [filled] a really good BL-shaped hole in our line-up, so to speak,” Love told the Daily Dot.