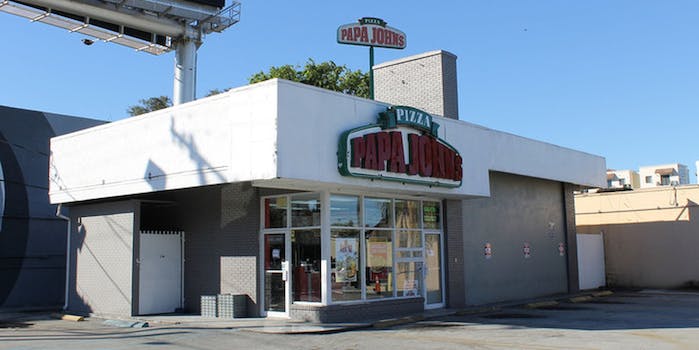 Did anyone order a pizza with a side of racism?

A Papa John’s employee in Louisville, Kentucky, has been fired after allegedly writing on a pizza box that the name of a Korean-American customer was “Ching Ching” over the weekend.

Laura M. Cheifetz, whose colleague attends church with the customer, shared a photo of the label on social media, expressing her outrage about the mislabeling of the pizza. She urged her followers to let Papa John’s know how they felt about the display of racism.

“Feel free to let them know you won’t be patronizing them until they fix their racism problem,” Cheifetz wrote on Facebook.

Cheifetz also vocalized her anger on Twitter and received a response from Papa John’s support.

A church lady orders a pizza. @PapaJohns hears her accent and decides this name is good for the account. #racism https://t.co/KqsYrIxITT

We sincerely apologize for this mistake and are working to make it right with the customer.

@IAmPapaJohn This is simply unacceptable. Make sure you are represented by those who reflect your values.

This isn’t the first time Papa Johns’s employees have gotten in trouble for racial slurs. In 2013, the pizza company’s CEO had to apologize after an employee butt-dialed a customer and called him the N-word.

And on Jan. 6, 2012, another customer, Minhee Cho, went to a Papa John’s in New York City where employees wrote her name as “lady chinky eyes” on the receipt.

Still, Papa John’s support assured concerned customers that the incident was not in line with company values.

This action is inexcusable and doesn't reflect our company values. This employee is no longer a member of the PJ's team.

At press time, the Papa John’s customer and Cheifetz were unavailable for comment. On Twitter, Cheifetz conveyed that she was dissatisfied by Papa John’s response.

“Wish there were conduct standards and training instead of ‘it’s a mistake,'” she wrote.