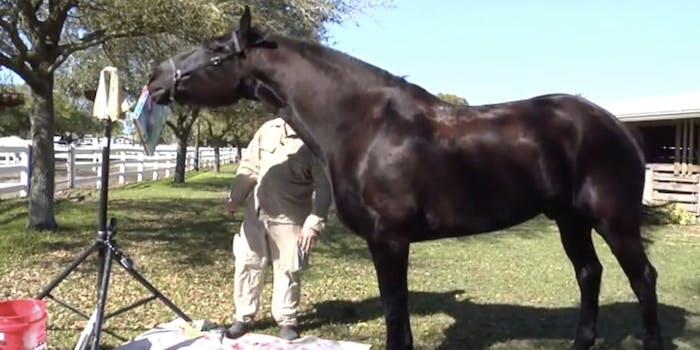 It’s the stuff of Babe sequels.

Meet Jacob the painting police horse. When his human partner, Officer Jason Hughes of the St. Petersburg police department in Florida, noticed that Jacob enjoyed putting things in his mouth, it didn’t take much to get this equine law-enforcer to arrange color on a canvas with a paintbrush.

“He took to it pretty easily,” Hughes says in a video from the St. Petersburg Police Department (below). As Jacob lacks human hands, arms, and opposable thumbs, it’s up to Hughes to dip the brush in the paint and offer it to Jacob to grip in his mouth. After that, he smacks the brush against the canvas to turn out some abstract expressionism.

Hughes has kept up with the painting for Jacob because it keeps his law enforcement partner challenged, Hughes says, and helps develop trust between the two, who have already been working together for six years.

Depending on how you’re wired, the very next question worth asking is, “Does Jacob retain control of his artistic intellectual property?” Perhaps you recall the famous monkey selfie—with no human author, it’s commonly acknowledged that such a photograph isn’t subject to copyright. But it’s not nearly that clear-cut with a painting. Long story short, it depends on who you ask. Wikipedia’s interpretation says Jacob does not own his paintings, but this view isn’t held by everyone.

It’s unlikely that the question of copyright is one that urgently requires answering any time soon. Jacob still has his day job to worry about: fighting crime as a horse.

You can see Jacob go full Jackson Pollock in the video below.