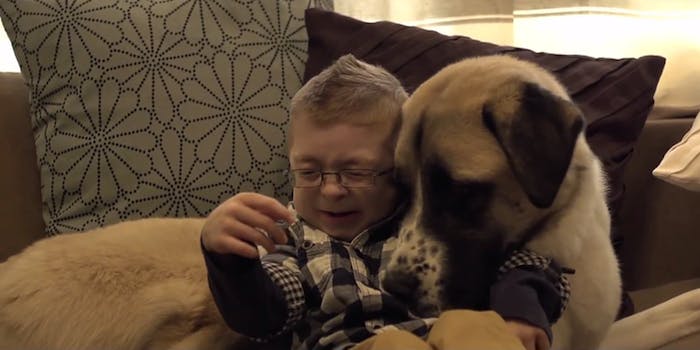 You might want to bring out the tissues for this one.

The heartwarming bond between a 3-legged dog and his 8-year-old owner with a rare medical condition knows no bounds.

Their friendship, documented in a short film released Thursday on YouTube, focuses on Owen Hopkins, who has Schwartz-Jamel syndrome, a very rare and painful condition that causes his muscles to be permanently tense. When Owen got older, he became aware of his condition and was afraid to go outside.

But everything changed when he got Haatchi.

The Anatolian Shepherd had been beaten and lost one of his legs after being struck by a train in 2012 before being adopted by the Hopkins family. And when Haatchi and Owen finally met, things just clicked. It was unconditional love at first sight.

The duo’s bond has been documented in an award-winning film and a new book, and in the time that the two have spent together, Owen has been able to go outside again and even engage with strangers.

Pets might not be the best medicine, but that bond can do wonders.

Photo via A Boy and His Dog/YouTube