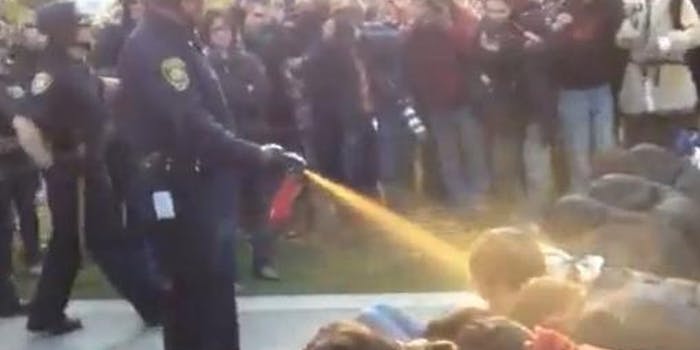 Outrage spreads over video of protesters being pepper-sprayed

A video of seated protesters being systematically pepper-sprayed sparks calls to action.

On Friday, UC Davis students gathered on campus to protest tuition hikes. About a dozen students sat on the ground with their arms linked and refused to move. An officer walked in front, holding a red spray-can of apparently military-grade pepper spray and doused the seated students in the face.

Students vomited, suffered burns to their lungs, and one student, who suffers from asthma, was hospitalized.

Footage of the chaotic incident was uploaded onto YouTube within hours, where it spread furiously through various social media.  For example, the Reddit thread on the video collected more than 5,000 irate comments, sentiments that were echoed on Twitter and in YouTube comments.

In less than 48 hours, videos of varying angles of the incident were viewed more than a million times. The incident, and the accompanying videos, went on to become the subject of countless media mentions, including the Atlantic,  NPR, Boing Boing, the New York Times, and the Washington Post.

The board of the Davis Faculty Association, as well as other groups, quickly called for UC Davis Chancellor Linda P.B Katehi’s resignation, after Katehi originally defended the police, who had claimed they were surrounded and needed to defend themselves.

On Sunday, two police officers were placed on administrative leave for their use of pepper spray, The Davis Enterprise reported. Katehi also vowed to speed up the process for the task force investigating the incident.

Protesters and campus officials took calls from various local news outlets as well as CNN and “Good Morning America” the next day, leading campus officials to organize a conference where Katehi could address the media, according to the Sacramento Bee.

Katehi refused to step down during a Saturday press conference:  “I don’t think it’s appropriate for me to resign at this moment,” she said, according to the Bee.

Katehi  did however, write on her official blog that she will be “forming a task force made of faculty, students and staff to review the events and provide to me a thorough report within 90 days.”

Videos of pepper spray being used against Occupy protesters are fairly common on YouTube these days. However outrageous or obvious the police brutality appears or how angry the digital masses, usually nothing usually comes of the footage.

The newest incident, however, is obviously different.