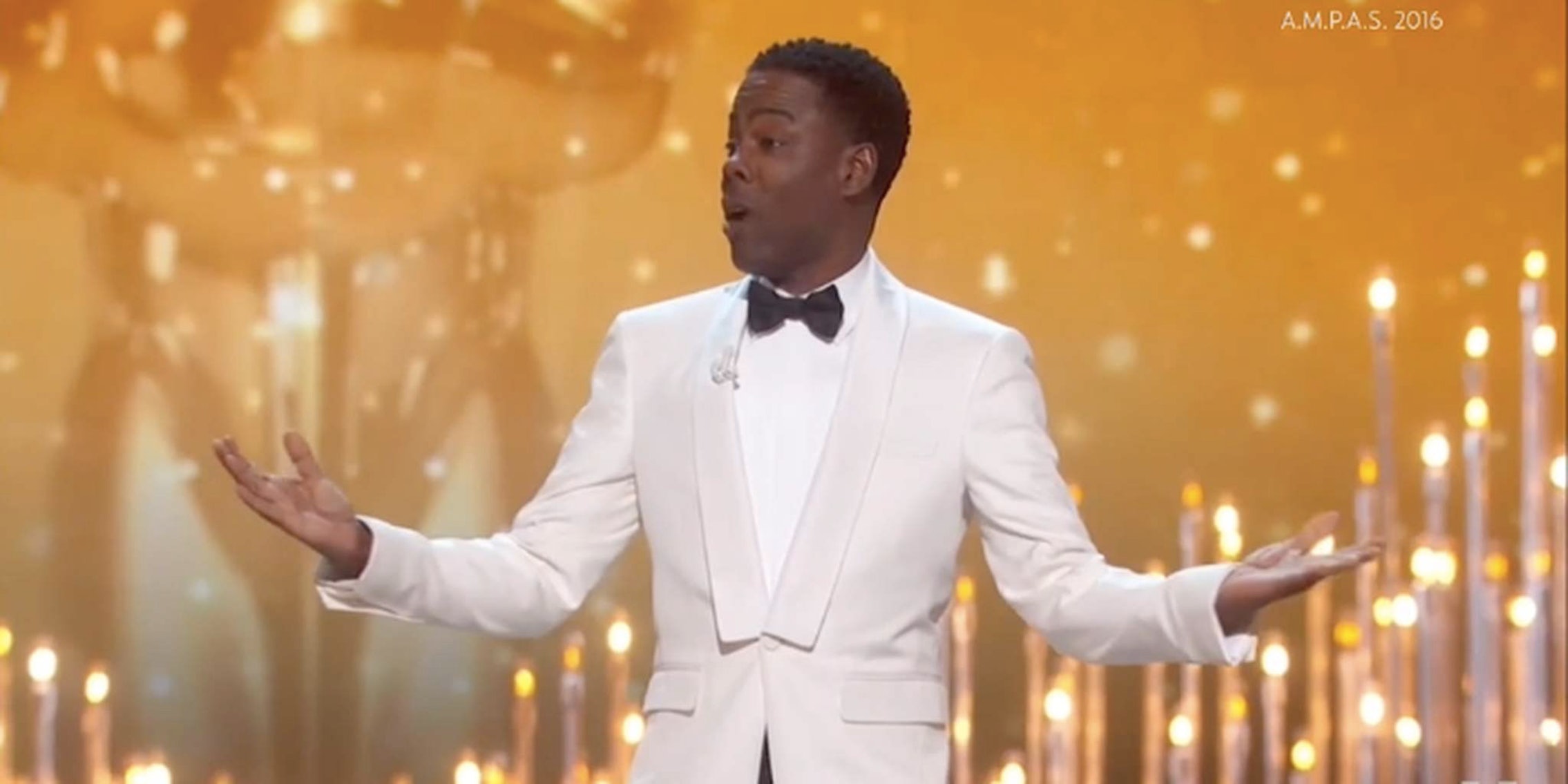 His firebrand jokes were just the beginning.

In the weeks leading up to the Oscars, the awards were repeatedly criticized for lack of diversity among the nominees. All eyes were on host Chris Rock—who is black—Sunday evening to see how he’d approach the issue. And while he had no qualms about tackling it, some from other groups of color felt excluded.

Rock kicked off the 88th annual Academy Awards by wasting no time getting into the show’s diversity problem, which has been summed up succinctly by the hashtag #OscarsSoWhite. “Man, I counted at least 15 black people on that montage,” Rock said of the opening montage featuring clips of the year’s best films. “I’m here at the Academy Awards, otherwise known as the White People’s Choice Awards.”

Then Rock went all in:

It’s the 88th Academy Awards, which means this whole no black nominees thing has happened at least 71 other times. O.K.?

You gotta figure that it happened in the ’50s, in the ’60s—you know, in the ’60s, one of those years Sidney didn’t put out a movie. I’m sure there were no black nominees some of those years. Say ‘62 or ‘63, and black people did not protest.

You know, when your grandmother’s swinging from a tree, it’s really hard to care about best documentary foreign short.

It resonated as a victory for black people in the industry—landing prime-time placement on a prestige telecast.

Know why I hate "why is diversity so important" question? It implies matter should be UP FOR DEBATE. As if LACK of diversity could be valid.

But other groups, like Latinos and Asians, felt that Rock’s monologue didn’t pitch a broad enough tent, and found flaws in his bold attack on Hollywood’s whiteness.

"We want Black actors to get the same opportunity…" @chrisrock But what ABOUT the Latinos? We want that too! #Oscars #OscarsSoWhite

Prominent Twitter personality Wajahat Ali shared his displeasure with Rock’s monologue for only touching on issues from the black community.

Soon after, Asian-American actress Ming-Na Wen, one of the stars of hit TV show Agents of S.H.I.E.L.D., joined in on the conversation to echo Ali’s sentiment. She has since deleted her tweets of support, but the screenshot below shows one of her earlier comments. 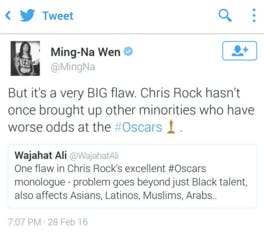 The three aforementioned tweets, combined with the discussion around #OscarsSoWhite and a long history of the black rights movement being criticized, was enough to compel writer Mikki Kendall to share her thoughts on Twitter, using the hashtag #NotYourMule.

Someone tell me not to a do a #NotYourMule tag about the expectation that Black people take all the risk to advance representation in media.

In an email to the Daily Dot, Kendall explained that the hashtag is a nod to a line from Zora Neale Hurston’s iconic novel, Their Eyes Were Watching God, which says “De nigger woman is de mule uh de world so fur as Ah can see.” Meaning that black women (and men) are supposed to carry the entire burden of achieving racial equality.

“I was just tired of seeing the same old demands for Black labor with little or no support of Black people,” Kendall said. So she took to Twitter during Sunday’s telecast to reopen this conversation about black people not being the so-called mules for other people of color.

Someone tell me not to a do a #NotYourMule tag about the expectation that Black people take all the risk to advance representation in media.

When Peter Liang supporters argued he should get off for killing Akai Gurley because white cops did? That's not solidarity. #NotYourMule

Solidarity doesn't look like Black people taking the risks & everyone else reaping the rewards. #NotYourMule

Unsurprisingly, many non-black POC took umbrage with Kendall’s assertion that it wasn’t the responsibility of black people to carry the load. In a move reminscent of people using #AllLivesMatter in protest to #BlackLivesMatter, many were taking offense from a hashtag that was only meant to empower.

#NotYourMule is one more example of selfishness Solidarity is what I believe in, #SorryNotSorry you feel that way.#mutualism #SiSePuede

#NotYourMule my problem is that the black movement expects everyone to support them but they really can't support other PoC?

When we organize never for one set or another, the power is numbers. #NotYourMule is simply not my values. Each one teach one #solidarity

“I’m not surprised by the defensiveness. Generally Black hyper-visibility is conflated with the idea that Black people have no right to benefit from our own labor,” Kendall said. “April Reign didn’t make a #OscarsNotBlackEnough tag. She made an #OscarsSoWhite tag, and explicitly tweeted about the need for increased representation for all.”

In response to many of the detractors, Kendall and others tried to reinforce how the black community has historically been very open and encouraging to other groups of color.

Yes. History proves we've been generous to a fault, even at our own expense. It's rarely reciprocated. #NotYourMule https://t.co/0FxrDHxxRU

“Black comics fans joined the campaign for Iron Fist to have an Asian-American lead,” Kendall pointed out of the controversy surrounding the Marvel movie’s casting. “Black creators have been all over the push for increasing diversity in media, and yet quite a few NBPOC [non-black people of color] went out of their way to denigrate those efforts as whining. Some claimed that skin color shouldn’t matter, and that a lack of diversity isn’t a problem.”

Kendall speaks of Martin Luther King, Jr., Malcolm X, the Black Panthers, and Loretta Ross as people who have voiced support on behalf of other marginalized communities, and notes that “Black Lives Matter activists have been among the first to bring attention to the way police brutality impacts non Black communities too.”

Screengrab via the Oscars