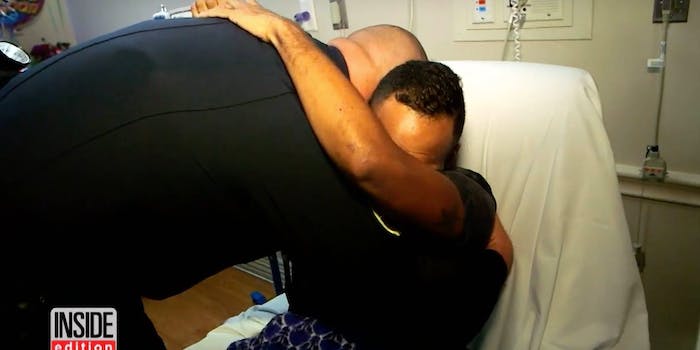 Orlando victim reunites with cop who saved him

Angel Colon is in recovery, and met the officer who rescued him.

Five days after the shooting at Pulse nightclub in Orlando, the injured victims are on the road to recovery (and likely facing massive medical bills, so, you know, donate if you can).

Angel Colon was shot three times at the club, then was trampled, as others tried to run for their lives. Now, in a video from Inside Edition, he meets Orlando Officer Omar Delgado, who rescued him from inside the club. They hug and Delgado has a sweet message for him: “I’m so glad you’re alive.”

Colon recounted his story at a press conference, saying shooter Omar Mateen tried to shoot him in the head, but hit his hand instead. Colon stayed on the ground, hoping that Mateen would think he was already dead. “I’m looking up at some cops, which, I wish I can remember his face, or his name, to say I’m grateful for him,” said Colon.

Delgado, the officer in question, saw Colon was still alive, and told him the only way he could get him out was to drag him out by his arm.

Colon is recovering from his gunshot wounds and a broken leg, and a GoFundMe account has been set up for him, the funds from which will presumably go toward paying for medical bills and physical therapy.

“Just knowing that I helped, assisted in that man’s life, and him thanking me, you can’t put into words,” Officer Delgado told Inside Edition. “You only get one life.”