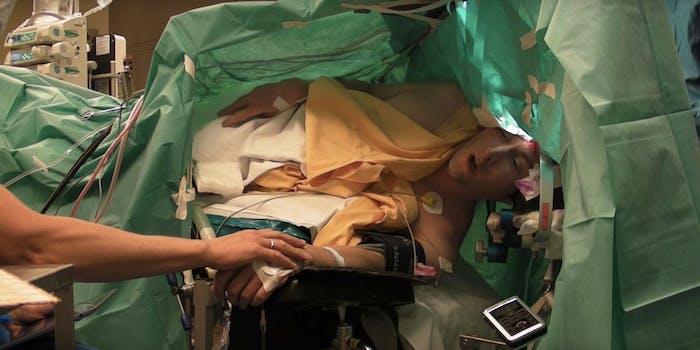 Opera singer is awake and performing Schubert during brain surgery

On the advice of his neurosurgeons, this opera singer with a brain tumor sang his heart out.

For some performers, the show must always go on.

Ambroz Bajec-Lapajne, a Slovenian opera singer, was diagnosed with a glioblastoma brain tumor. Last year, he underwent an awake craniotomy during which he performed the first and last couplets of “Gute Nacht” by Franz Schubert. According to UPI, medical staff at University Medical Center Utrecht wanted Bajec-Lapaine conscious and crooning so they could monitor his ability to sing and recognize key change, signifying possible deficits after the procedure.

In a YouTube description uploaded last week, Bajec-Lapjne writes that the 2:40 mark is when things start to get “very interesting.” (Don’t worry, there isn’t any blood.) His singing falters — and you suddenly remember you’re watching someone undergoing brain surgery — but he impressively picks up again later in the video:

One year after his surgery, Bajec-Lapajne writes that he’s feeling well and continuing his professional singing career — which is music to our ears.