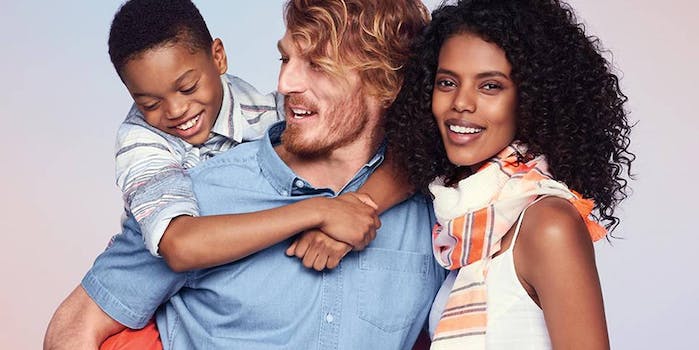 Old Navy is getting racial backlash from some of its followers after a recent ad featured an interracial family.

On Friday, the clothing store tweeted out a link to its Thank You Event, which offered 30 percent off of customers’ entire purchases. In the accompanying photo are a white man, a black woman, and a black boy.

While some ads in recent months have sparked an outcry from customers—such as the Gap Kids ad that had some people accusing Gap of racism—the Old Navy ad is inspiring a backlash of a different kind.

It appears that racist trolls are taking issue with Old Navy putting an interracial family in an ad in the first place, accusing the apparel company of “miscegenation,” which is defined as “a mixture of races.”

Old Navy responded to one of the commenters to find out what disappointed him about Old Navy, although the complaint had nothing to do with unsatisfactory customer service.

Others commented about how ridiculous the racist backlash to the ad was while some chose to stay out of the kerfuffle at all. Tweets praising Old Navy’s decision to post an inclusive, diverse ad have been popping up as well.

@OldNavy Old Navy thanks for bomb ass jeans and beautiful representation. don't listen to these stupid hicks and their whiny ass insults.❤️

Hey @OldNavy, my family and I thank you for the diversity in this ad! #LoveWins, no matter the color ❤️ pic.twitter.com/TjgYUPMGu4

2016: People are complaining about interracial family in the @oldnavy ad make me question humanity https://t.co/pRqOwl4jhV