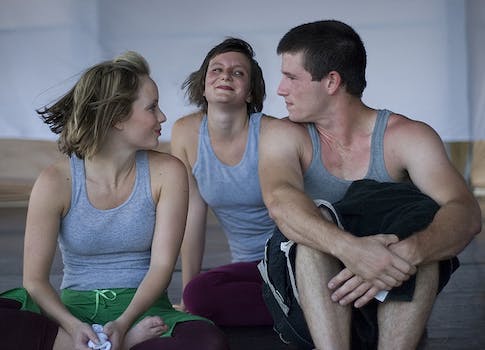 OkCupid will cater to polyamorous relationships—but is it too little, too late?

'Polyamory is not just group sex.'

OkCupid unveiled its newest feature Friday that allows people who identify as polyamorous to link their profile to their significant other, while looking for other people to bring into the relationship. This may sound like a forward-thinking, modern-minded move, but some aren’t so sure.

“It seems that now people are more open to polyamory as a concept,” Jimena Almendares, OkCupid’s chief product officer, told the Atlantic about the new feature. Users classified as “seeing someone,” “married,” or “in an open relationship” (an option added in 2014) now have the ability to link with another user. But for people who don’t have a primary partner, this presents a challenge. Jonathan Ben-Menachem is one of those people.

“I identify as non-hierarchically ethically non-monogamous (meaning no primary partners), and I tend to seek out ‘solo poly’ relationships (one-on-one) rather than polycules, or larger group setups,” the 21-year-old New York University student told the Daily Dot via email.

Ben-Menachem says that the new feature is geared toward people in hierarchical ethical non-monogamous relationships. He also points out that the dating app is already a go-to destination for people in poly relationships, with people easily linking to their various partner’s profiles in the body of their profile. That’s why rolling out this feature as if it’s a big step forward “demonstrates a basic lack of understanding of the many varieties of poly preferences.”

The new development also sparked a debate Friday on the r/polyamory subreddit, where users were wondering if the new functionality was so narrow because of engineering limitations, or if OkCupid was perhaps not as forward-thinking as it’s trying to appear.

One user, who appears to have knowledge of computer programming, writes:

From another programming perspective, a One to Many database structure would make this simple. Simply store the MainID and the PartnerID and then select all the PartnerIDs that have the MainIDs .. ID.. then loop over the results and display them. This is NOT hard to do at all.

Another added that it was “amazingly short sighted of them and they are making it harder on themselves to make it more dynamic later.”

Programming issues aside, a user called it “a half measure, which is better than nothing I guess,” before continuing:

this option as it is will work very nicely for couples with a dynamic that supports the “we come first” hierarchy. I guess I just wonder how much this feature is really meant to cater to the broader poly crowd.

Others took issue with a study cited by the Atlantic that said it’s “common for couples to begin their foray into polyamory by searching for a single, bisexual woman to court,” commenting, “That article reads like a ‘bad poly’ primer. Date together! Unicorn hunt! Poly = group sex!”

But Effy Blue, a life coach specializing in unconventional relationships, is more understanding of OkCupid’s effort to be more inclusive of the poly community. “From what I know of OKC, they are very data driven,” Blue wrote in an email, citing OkCupid founder Christian Rudder’s book Dataclysm as proof of the company’s focus on intense analysis. “They build new features and make amends to the existing site based on the data they see. You have to remember these kinds of changes to the site require extensive coding across the whole site because of the match algorithms they are using. It is not something you can do overnight. These are seriously complicated [math] problems for them.”

For those who feel confined by OkCupid’s definition of polyamory, there are other existing apps that cater to all forms. Blue points to 3nder (the poly answer to Tinder), PolyMatchmaker, and Beyond Two as viable options. There’s also OpenMinded, which the Daily Dot recently explored extensively.

In an email to the Daily Dot, an OkCupid spokesperson said there’s a possibility of the multi-partner feature morphing as it gains in popularity:

As more people use Couples Linking, this feature could evolve to include multi-partner units. In addition to relationship status (single, seeing someone, married, in an open relationship), we allow users to set a relationship type (monogamous, non-monogamous) — both relationship status and type are searchable on Browse Matches. We will continue to enhance the OkCupid experience as we detect upcoming trends to reflect what our users want.

In some ways, this is what poly users have wanted from OkCupid. Though Ben-Menachem points out the update is “YEARS late” in incorporating additional gender identifies. He wonders what took so long.

“This seems to miss the point of polyamory—it’s not just debauchery, it’s multiple meaningful relationships,” Ben-Menachem says. “Polyamory is not just group sex.”