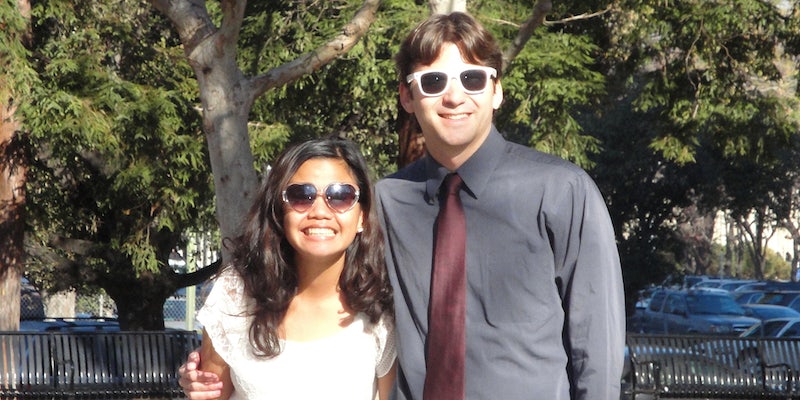 He was in New Jersey. She was in the Philippines. Now they're married.

With the approach of Valentine’s Day usually comes the re-evaluation of one’s love life (or lack thereof). If you happen to be single and absolutely ready to mingle but it’s just not working out with your circle of acquaintances, you might think, Is online dating something I should try?

The Internet has myriad ways to improve your quality of life and that certainly includes your love life, too. If you’re still not sure if using dating apps or sites can truly produce a meaningful romantic relationship, here is a story about finding love online that might just be the hope and encouragement you need. How do I know about it?

Jam: When it comes to dating, I’ve never really played the field. I was always some guy’s girl best friend, and then soon after, their girlfriend. On paper, that scenario may seem like it has the makings of a great romance, but in reality, my relationships were just as vulnerable as everyone else’s.

One night—on New Year’s Eve, to be precise—I just decided I was done. I was done taking love too seriously and being in long-term relationships that almost always ended up in heartbreak. I was done being scared to step out of my comfort zone and actually meet guys from all walks of life. It didn’t even matter if they were within meeting distance in real life. Something had to change. That realization was what drove me to Google the term “online dating” and land on OkCupid.

Jason: I never imagined that I would meet the love of my life on the Internet. I had just moved across the country to New Jersey in the middle of winter—to the same general area where they filmed Jersey Shore—to restore a sailboat someone gave to me for free on Craigslist. While the prospect of moving to a new place just to claim a free sailboat may sound like an awesome story, that decision wasn’t really conducive to keeping existing friendships or making new ones. I was a bit lonely. So I signed up for an OkCupid account.

I never imagined that I would meet the love of my life on the Internet. — Jason

Jam: I wasn’t exactly looking for a boyfriend when I signed up for online dating, but I did want to see what and who was out there. Most of the connections I’ve made on the site developed into online friendships that involved an exchange of emails, Facebook friend requests, and text chats. Of course, Jason blew everyone out of the water.

Jason: Meeting Jam was sort of a miracle. One of the first few people I was talking to on OkCupid happened to be some other girl from the Philippines, who made the first move in contacting me. We had already exchanged a couple of long emails when I decided to dig deeper and find out more about her through her profile. OkCupid had a testimonials area of sorts where you could give users “awards” and on this girl’s profile happened to be one from Jam. Based on what was written, it seemed like they knew each other in person, so I checked her profile out.

Jam: Jason visited my OkCupid profile at the most opportune moment—I was recovering from a recent online dating disaster and was determined to erase the memory by getting back into the site when I received a view notification from him—and I took it as a literal sign to immediately make contact.

Jason: It pretty much took off from there. It might be better to consider our email exchanges closer to the epic letters that historical figures painstakingly wrote to each other over the course of years. Email just meant we could send each other ten thousand words of text per day, instead of per month.

It might be better to consider our email exchanges closer to the epic letters that historical figures painstakingly wrote to each other over the course of years.

Jam: Only in our case, it wasn’t painstaking at all. It felt very natural. I initiated the correspondence by sending him a list of questions to answer about his life (I love asking questions) and in return, he’d answer them and ask me the same, while also adding questions of his own.

After around a week of exchanging daily lengthy emails, we transitioned into all-day Skype text chats. He worked from home and I was in the process of finalizing my college experience (we started chatting during my graduation month) and would talk to me every time he found himself on a break, which to me seemed to happen a lot. (OMG he totally liked me!)

Jason: Then we started sending each other “voicemails”—in quotes because Jam was in the Philippines, I was in the U.S., and I had likely never bothered to setup my actual voicemail in the first place. We actually recorded mp3s for each other and emailed them to one another, just to hear each other’s voice for the first time.

Jam: I remember feeling butterflies in my tummy the first time I heard Jason’s voice in an mp3, reading his favorite poem. I excitedly yelled for my mom to come into my room to hear him, and I remember her saying that he sounded like a nice guy. I retorted, “More importantly, he sounds super sexy.”

We sent each other voicemails a bunch of times, along with chatting on GChat or Skype and sending emails. We definitely took communication to another level that others might think is excessive, but somehow, we always found something new to talk about. We were definitely, in my book, connecting on all levels. Of course, video chatting was the obvious next step in our budding online romance. 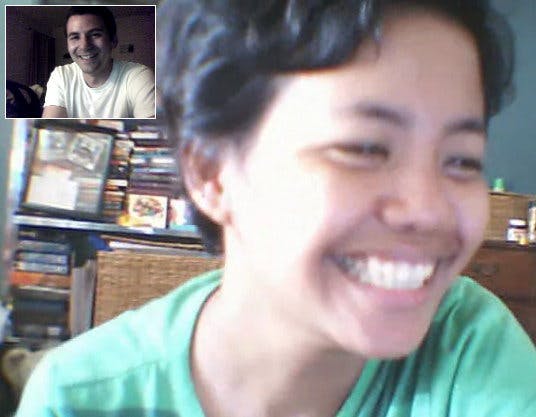 A screenshot of the moment we finally had the guts to see each other on video chat.

Jason: Once we made video chatting on Skype part of the program, things started to progress a lot quicker. We started watching movies and sports together through a video call. We’d torrent the same file, then do a countdown—three, two, one, go!—to know just when to start the mp4 on VLC. We were in sync and could chat over the action as it went on.

Jam: Jason met my entire family through Skype as well. I used to call my bedroom a coffee shop because people never knocked and just barged in, so of course when random visitors found me chatting with a man on Skype, curiosity would trump respect for privacy and they’d go over to my computer station, to say hi to the American guy on my screen.

Jason: A moment I will never, ever forget was the time I saw Jam’s dad pass by her open bedroom door, wearing only his underwear. That’s when I was sure that this wasn’t some kind of scam because no scam artist is going to let that dose of reality prick their fantasy balloon.

Jam: After another month, we both reached the conclusion that even though we haven’t gotten together in person because we had an entire ocean and a time zone between us, we knew that we felt intense feelings for each other. He sent me a YouTube link to the song “I Think I Love You” by David Cassidy.

And because I was a total sap, I responded in kind using “If I Fell” by The Beatles.

A lot of people might find a song exchange completely corny, but that’s pretty much all it took for Jason to buy a plane ticket to visit the Philippines for the first time and be with his online girlfriend for a two-week vacation. Some might assume that for people who have never gone on an in-person date before, a first meeting would be super awkward. But we had already spent so much effort getting to know each other through various online means that it felt like we’ve known each other for years.

We had already spent so much effort getting to know each other through various online means that it felt like we’ve known each other for years. — Jam

Jason: When I got back to the States, I knew right away that I had to make a change. I couldn’t go on with normal life and planning to go to the Philippines for two weeks a year. The natural decision was to sell everything I owned and buy a one-way ticket back. I sold the free sailboat for $2,000, my car, and put everything else I owned into storage in my parents’ garage. I left from JFK airport in New York with a single carry-on bag on a flight bound for Manila.

Jam: The year we spent together in the Philippines was full of life and love. We did a lot of traveling. We also lived together in all sorts of places—a shoebox condo unit, a beach house, and then finally, an apartment. After all that time together, I pretty much knew I was going to marry him. I guess somehow he felt the same because he invited me to come back with him to the States and continue the dream.

He proposed to me on New Year’s Eve. Now that I think about it, it was pretty perfect timing, considering it was also New Year’s Eve four years prior when I first got into online dating.

We got married on Friday the 13th, two months before what would have been our second anniversary as an online couple. 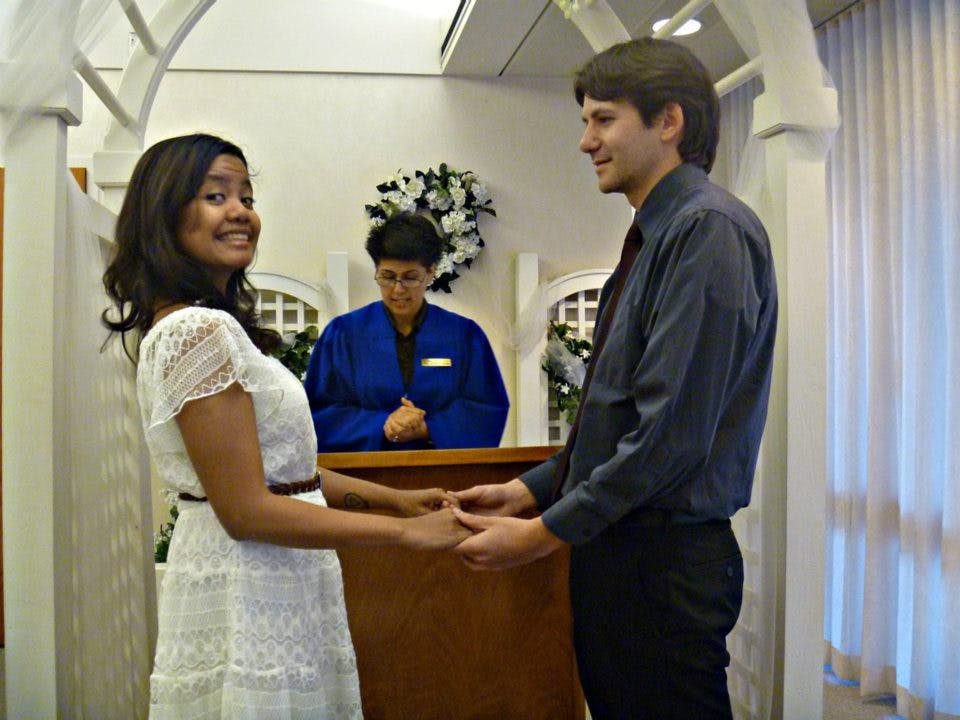 Jason: We knew we didn’t want to be the couple that went into debt for a wedding, and besides that, both of our families were thousands of miles away. We got married in the Santa Clara County municipal building and had a weekend honeymoon at Disneyland (Jam had never been, so it was perfect). 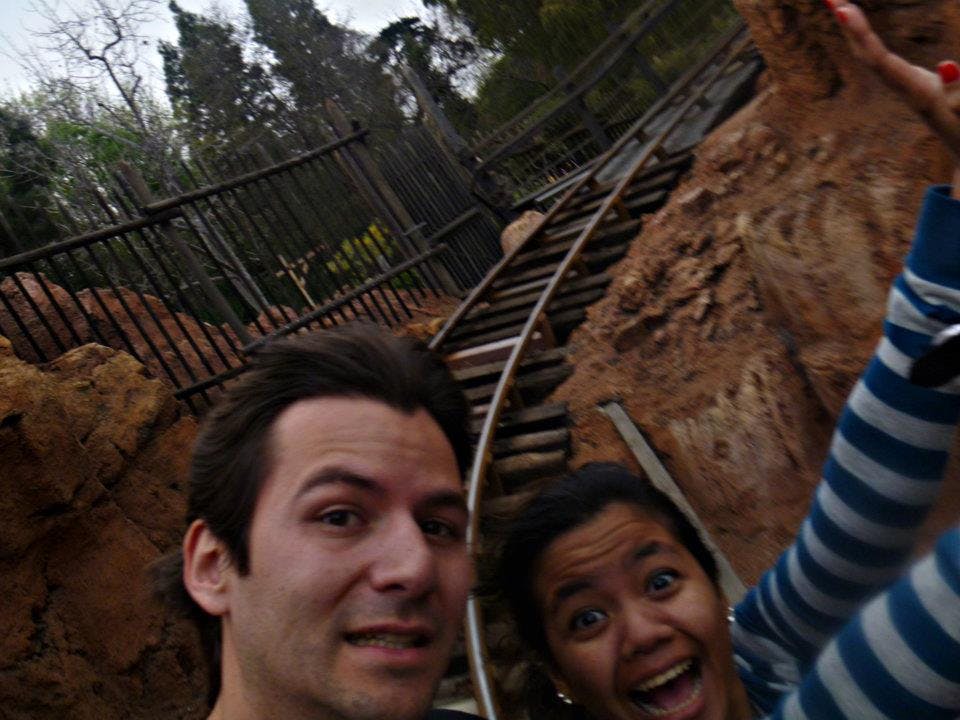 I don’t think much changed since the day we got married, which to me, was a sign that we were in a great relationship. We were just making something official that had been obvious for a long time.

Jam: We’ve been in a relationship for a total of six years, four of them as husband and wife. We’ve recently bought a house, adopted a puppy, and are now expecting our first child. We may have had a whirlwind beginning, and yes, like regular couples we’ve gotten into fights and disagreements, but the past few years have been the best ones of my life because I got to spend each and every moment with the perfect partner, with whom I share a love that’s strong and steady.

Online dating encouraged—if not forced—me to really dig deep within myself and be honest about what kind of person I was and wanted to become, as well as what kind of life I wanted to lead and with whom. It may sound cliché, but my stint on OkCupid challenged me to be even more open-minded and hopeful and to not be discouraged by not-so-trustworthy people or the lack of people to date within my vicinity. You don’t need proximity to prove chemistry. And not everyone is a creep, thank God!