Your city is flooding? It’s a great time for OkCupid!

The dating site picked a terrible time to email its Colorado users.

When it comes to seeking out potential mates online, nothing should stand in your way—not even historic floods.

The online dating site OkCupid occasionally sends out impersonal email “blasts” to its users. Such messages, which are generated automatically, note a user’s home region and other such information and play up these angles to entice that user to continue their search for companionship.

On September 13, one such email blast left a number of singles upset.

“We noticed it’s raining tonight in Boulder. Our statistics show that more people sign in when there is bad weather. It’s the perfect time to message that special someone!” 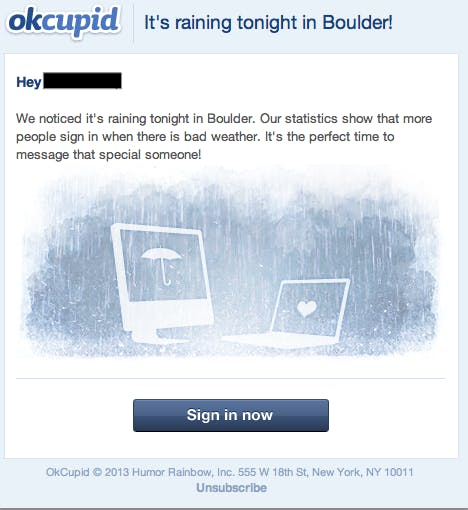 Yes, this particular message went out during the massive flooding that devastated Boulder, Colorado. A week of heavy rainfall flooded the town, killing at least eight people and stranding hundreds of others.

“It’s been really great trying to arrange meetups when it’s basically impossible to go south to Boulder/Denver/anywhere fun. Nothing like cataclysmic rain to get people together!” redditor katalaan said on r/okcupid.

So far, the dating company hasn’t publicly commented on its ill-timed message.

With hurricane season in full swing and wintry blizzards just around the corner, let’s hope that OkCupid monitors its future email blasts with a greater attention to detail—and national news.