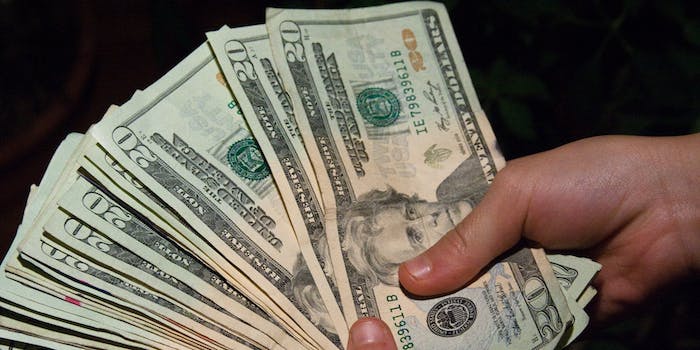 This Queens man is suing OKCupid after losing $70,000 to a catfish

He went looking for love in all the wrong places.

Michael Picciano, a 65-year-old man from Queens, went on OKCupid looking for love. But after losing $70,000 to a swindler who started a fake relationship with him online, he’s suing the dating website for failing to—wait for it—warn its subscribers against sending thousands of dollars to a stranger you just met online. And the 2014 Darwin Award goes to…

Picciano’s romantic travails began last year, when he logged onto OKCupid and struck up a correspondence with a man who called himself “Bruce Thompson.” After a few days of chatting, Thompson and Picciano moved to private emails, and Thompson soon started hitting Picciano up for money to start a “new computer parts business.”

Blinded by love (and presumably by the time vortex sending him back to the 90s, because who the hell says they want to start a “computer parts business” these days?), Picciano withdrew four separate transactions from his bank, wiring the payments to four different names all across the world.

Although literally all of the names and addresses sounded totally fake—”Dennis E. Racer” in Addison, Texas was one, “Edmond Thebeau” in Ontario another—Picciano didn’t spot any red flags until a friend found Thompson’s name on the website malescammers.com last April. Police later discovered that all of the payments had ended up in Thompson’s bank accounts, and that a $100,000 check Thompson sent him as a show of good faith was a fake.

Instead of chalking this one up as a loss, learning from his mistakes, and possibly going to the doctor to get a brain transplant, however, Picciano is filing suit against OKCupid (he’s also suing his bank, Capitol One, for failing to tell him which account his wire transfers had ended up in). In his lawsuit, Picciano faults the online dating giant for failing to warn him about the dangers of online scammers, arguing that he fell for Thompson’s tricks because he trusted OKCupid’s sterling reputation (really, dude? Log into any female user’s message box and say that again with a straight face).

The worst part about this story, however, is not that Thompson exploited a lonely man’s desire for companionship for financial gain, nor Picciano’s futile efforts to recoup the money he’s lost. It’s that Picciano is likely not Thompson’s last victim: The lawsuit alleges that Thompson is still on OKCupid, cruising for potential patsies under the name “bigheartedbt.”