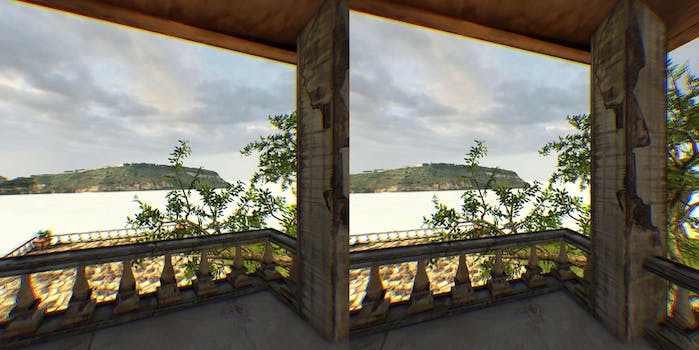 I went on a virtual reality vacation to Tuscany

Could the Oculus Rift revolutionize the "staycation"?

We’ve all been there: Nooking hotel rooms online can be a real gamble. Showing up to find, er, what most athletes found last month in their Sochi hotel rooms—a one-star experience—is never wanted, especially if photos on the hotel’s website gave a decidedly nicer impression. So instead of risking a horrendous vacation, why not enjoy a full-on preview in virtual reality?

At the ITB Travel fair earlier this month in Berlin, a German company called THIS IS! Digital Media Group showed off how it could give 3-D tours of hotel rooms, villas and even beaches by using Oculus Rift headsets. The goal? To give prospective tourists virtual impressions of destinations before they make their final choice.

“Gamers are used to exploring virtual worlds, seeing themselves with guns or whatever,” said Yannick Müller, a rep from the firm. “Obviously, it’s a more exciting world in gaming, but for travel agencies, they can use virtual reality to show their clients hotel rooms before booking them, their spas and their beaches, even inside their aircrafts.”

At the DMG gaming booth, you could check out a variety of hotel rooms ranging from traditional, conservative rooms with long curtains to the cooler type of apartments with kitchens and space-age furniture. While it is weird prowling these rooms without aliens or guns, it’s also a bit relaxing, allowing your imagination fill the spaces of what your days off could look like. Although, it makes you feel totally in your 30s (and too old for gaming).

Probably the best experience was checking out a gorgeous villa in Tuscany, Italy, with a view of the Mediterranean from one balcony—even though the weather was a bit cloudy. After enjoying a view of an anonymous island on the horizon, I was able to walk around the house, taking a cobblestone path to a perfect patio crowned with a fountain. Inside, there was a candlelit dining room with a toasty fireplace and landscape paintings, giving the vibe of a medieval masterpiece.

Granted, the most immediate use of such tech would be for luxury tourism, not for cheap hostel-hunting. But it’s not far from the mainstream, especially with Sony suggesting tourism as a use case of its new VR tech for PlayStation 4. Clearly, holes in the walls, poor plumbing, and poopy pigeons will never make the virtual reality tours of any travel destination, but if travel reviews team up with virtual reality tours, our future vacations will be a whole lot more true to advertisement—that is, if we even need to lead the couch.

Photos via THIS IS! Digital Media Group