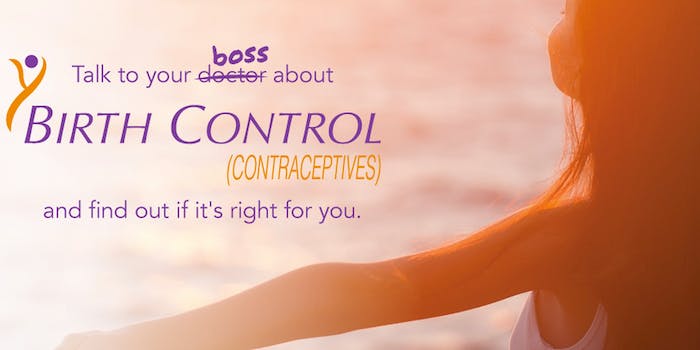 @BarackObama’s #TBT tweet is the best ‘Hobby Lobby’ snark yet

Justice Ruth Bader Ginsburg would definetly retweet this one.

In honor of Throwback Thursday, the Internet’s sacred weekly holiday, @BarackObama dispatched a tweet that was so snark-filled it could land the president a job as a contributor at Gawker. In reference to Monday’s Supreme Court ruling on Burwell v. Hobby Lobby, @BarackObama tweeted:

Throwback to last week when a woman—not her boss—made her own decisions about her health care. #TBT pic.twitter.com/xmQ5e7DFmW

Fully comitted to his sharp jab at the court’s ruling that private companies don’t have to provide contraceptive coverage to their employees, as stated in the Obamacare mandate, @BarackObama included a mocked-up photo that lampoons the archtypal imagery contraceptive companies use in marketing birthcontrol and contraceptives towards women.

To be clear—because it’s totally not clear—tweets posted to the @BarackObama Twitter account are rarely written by the president himself. Instead, the account is run by Organizing for America, a non-profit that took it over after President Obama’s 2012 reelection campaign. Any tweets written by Obama are signed “-bo,” according the account’s bio—though that almost never happens.

Regardless, we know if Justice Ruth Bader Ginsburg, who opposed the court’s male-dominated majority opinion in Hobby Lobby, was on Twitter, she’d definetly retweet.  After all, 140 characters stings quicker than a 19 page dissent.