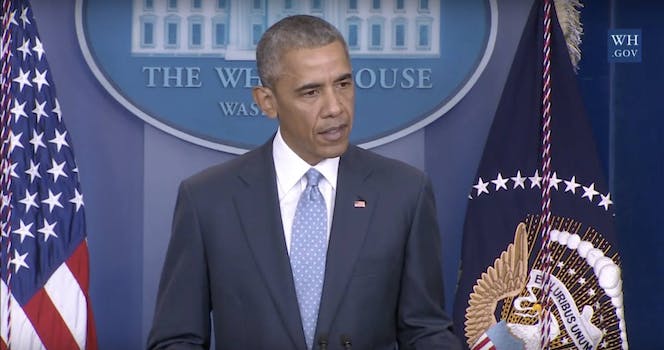 Obama speaks out about Baton Rouge police killings, pleads for unity among Americans

President Obama delivered a speech on the police killings in Baton Rouge, Louisiana on Sunday.

On Sunday morning, three police officers in Baton Rouge, Louisiana were shot and killed by a gunman who was reportedly armed with a rifle. This tragic incident continues what’s been a bloody couple of weeks for members of American law enforcement.

Much as he did following the deadly police ambush in Dallas last week, President Obama has responded, delivering remarks to assembled media at the White House press briefing room late Sunday afternoon.

While details about the identity and motives of the shooter are still unclear, the cost in terms of human lives is explicit. Three officers have been slain, and another, according to Obama, is in critical condition.

“As of right now, we don’t know the motive of the killer. We don’t know whether the killer set out to kill police officers, or whether he gunned them down as they responded to a call. Regardless of motive, the deaths of these three brave police officers underscores the danger that police officers across the country confront every single day. And we as a nation have to be loud and clear that nothing justifies violence against law enforcement. Attacks on police are an attack on all of us, and the rule of law that makes society possible.”

Obama stated that he’d already spoken to Louisiana Gov. John Bel Edwards and Baton Rouge mayor Kip Holden, and offered them the full support of the federal government in achieving justice for the slain and wounded officers.

He then went on to strike the very same tone he did in the aftermath of the Dallas shooting, emphasizing that such violence was unacceptable under any circumstances, regardless of the shooter’s motivations. (which again, remain unclear) Obama is urging Americans to focus on ways to unify the country, and refrain from stoking any deeper divisions.

“Five days ago, I traveled to Dallas for the memorial service of the officers who were slain there. I said that that killer would not be the last person who tries to make us turn on each other, nor will today’s killer. It remains up to us to make sure that they fail. That decision is all of ours. That decision to make sure that our best selves are reflected across America, not our worst. That’s up to us.

We have our divisions, and they are not new. Around-the-clock news cycles and social media sometimes amplify those divisions, and I know we’re about to enter a couple of weeks of conventions where our political rhetoric tends to be more overheated than usual. And that is why it is so important that everyone, regardless of race, or political party, or profession, regardless of what organizations you are a part of, everyone right now, focus on words and actions that can unite this country, rather than divide it further. We don’t need inflammatory rhetoric. We don’t need careless accusations thrown around to score political points, or to advance an agenda. We need to temper our words, and open our hearts, all of us.”

In closing his statement, Obama saluted the “brave officers” who lost their lives on Sunday morning, calling once more for a national unity which at times seems painfully lacking.

You know, someone once wrote: A bullet need happen only once, but for peace to work we need to be reminded of its existence again, and again, and again. My fellow Americans, only we can prove, through words and through deeds, that we will not be divided, and we’re gonna have to keep on doing it, again and again and again. That’s how this country gets united, that’s how we bring people of good-will together. Only we can prove that we have the grace, and the character, and the common humanity to end this kind of senseless violence. To reduce fear and mistrust within the American family. To set an example for our children. That’s who we are, and that’s who we always have the capacity to be. And that’s the best way for us to honor the sacrifice of the brave police officers who were taken from us this morning. May God bless them and their families, and may God bless the United States of America.

Louisiana governor John Bel Edwards also gave a press conference on Sunday responding to the shootings. While he didn’t break any major news in doing so, he did speak with apparent emotion, calling the shootings “an absolutely unspeakable heinous attack,” according to ABC News, and echoing a sentiment that countless officials and politicos have been voicing in the past few weeks of violence: “We have to be better.”