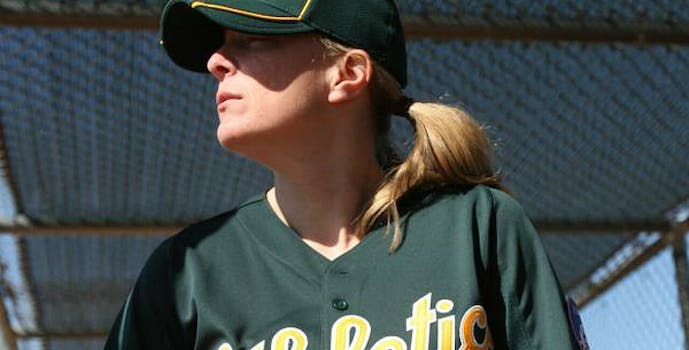 Fellow trailblazer Dr. Jen Welter was one of the first to congratulate her.

The past 12 months have been a banner year for women participating in professional men’s sports. From newly hired NFL referee Sarah Thomas to Spurs Assistant Coach Becky Hammon making her NBA debut—both are the first of their gender to work in those capacities in either league—women have shown they can be hired and respected in what was once a men’s-only domain.

Now, Major League Baseball has taken that step, as the Oakland A’s have hired Justine Siegal to be a guest instructor for their Instructional League club. And one of the NFL’s female trailblazers couldn’t be more ecstatic for her.

That would be Jen Welter, who became the first female NFL coach this past season when she took a job as a coaching intern with the Arizona Cardinals, working with the team’s inside linebackers. When her job was finished after training camp, Welter told CNN that it went “better than I could have possibly imagined. I love those guys. I love the team… They were respectful, they were receptive, and we all became really good friends with a lot of football and respect in between.”

Now, Siegal gets her chance.

Honored and grateful to be a guest coach for @Athletics during Instructional League. Baseball really is a game for all. #DreamBig

“It’s a dream come true,” Siegal told the San Francisco Chronicle. “The A’s are a first-class organization, and it will be an honor to wear their uniform.”

Siegal, who will coach the A’s minor leaguers from Oct. 4-17, actually has played the role of trailblazer before. She was the first woman ever to coach professional baseball when she was the first-base coach for the Brocton Rox, an independent team. With the A’s, the Chronicle writes, she’ll coach up the infielders, throw batting practice, and hit practice grounders and fly balls.

The 40-year-old Siegal also might have a chance at landing a full-time job.

“I think it would be incredible to coach full-time,” Siegal told the newspaper. “But for now, I’ll do my best every day to help out any way I can, from carrying water to throwing BP to using my Ph.D… I’ve found from experience that men are surprised to have a woman coach, but when they realize you know what you’re talking about and that you care, you fit right in with the rest of the staff.”

As for the Twitter reaction, it was celebratory. In fact, I didn’t find a single negative or misogynistic tweet directed to or about Siegal. That, one supposes, is a good sign.

It is not about being the "first" or the "only"…it's about creating a pathway for the girls coming up.