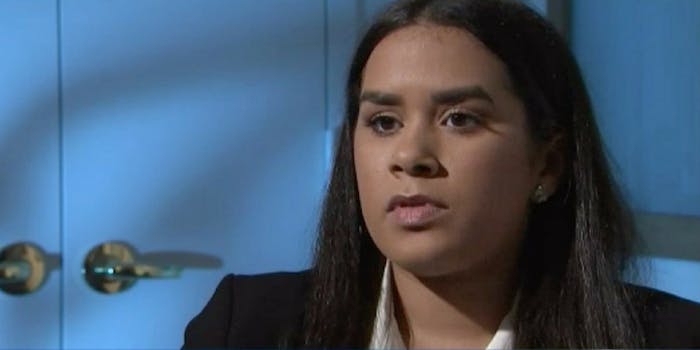 Woman says cop abused power to get her phone number, then sexually harass her

She says he texted her that she was 'thick in all the right places.'

A New York Police Department officer has been sued and is under internal investigation after a 22-year-old woman he arrested came forward with allegations of sexual harassment.

Speaking to the news station, Sifonte said the texts became sexual in nature and included comments such as that Sifonte was “thick in all the right places” and “looked better in handcuffs.” Santiago allegedly asked her if she was interested in threesomes, and told her they were on his bucket list. Santiago also reportedly told Sifonte he was interested in coming to her house to give her a massage.

According to the suit, Santiago’s less-sexual texts included him saying that Sifonte owed him donuts and that she should let him know when she was free. He also threatened to show up at her home for dinner, the suit allleges.

At one point she said she asked him if he always flirts with women he arrests, to which he replied, “Only the attractive ones.” Sifonte said she never even gave him her phone number.

“This person took my number off of the documentation and continued to harass me. So I definitely knew that he was abusing his power as a police officer to sexually harass me,” she told NBC New York.

Sifonte said she initially texted Santiago back and sent him photos that weren’t provocative to comply with his requests, because she was afraid of how he might have been able to influence her criminal case. She was originally given a ticket to appear in court, but her attorney, Henry Bell, said her case was eventually dismissed and sealed.

Sifonte has filed a suit against the city of New York, the NYPD, and Santiago. The NYPD says it’s internally reviewing the matter but has left Santiago on duty, while the city says it’s reviewing the lawsuit.

“My skin was crawling. It was disgusting. I mean, it was giving me anxiety,” Sifonte said. “I think he’s a sexual predator. This isn’t OK, and if you don’t step up and you don’t let others know this is happening, things will continue to happen or get worse, and that’s a scary thing to even think about.”