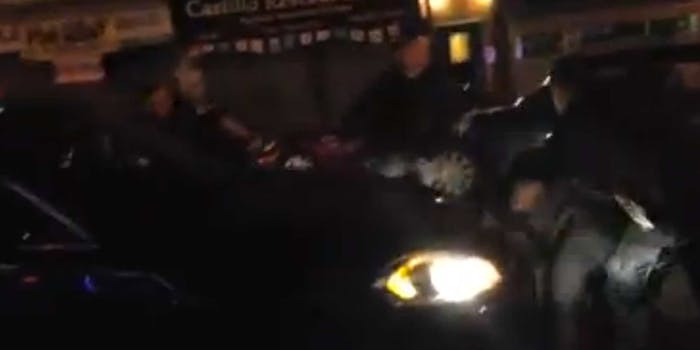 "I am still afraid that something is wrong."

A shocking video posted to Facebook earlier this week shows an NYPD officer slamming a pregnant woman onto the pavement while making an arrest.


The cellphone video, recorded by a bystander and posted to the social network by the local community group El Grito De Sunset Park, was shot early Saturday morning, around 2am, in the Sunset Park neighborhood of Brooklyn, N.Y. In the video, a police officer can be seen struggling to restrain 44-year-old Sandra Amezquita, who is five months pregnant, before she is thrown, stomach-first, onto the street.

Another women, reportedly a friend of Amezquita, can be seen in the video being violently shoved to the ground by a different officer.

Amezquita told the New York Daily News that she experienced vaginal bleeding and significant bruising to her stomach and arm. “I was afraid something happened to my baby. I am still afraid that something is wrong,” she said through an interpreter.

The altercation began when the couple attempted to stop police officers from beating up their 17-year-old son, Jhohan Lemos, who was being arrested for criminal possession of a knife. A photo of Jhohan Lemos published on the Daily News website shows the teen’s face bruised and bloodied following his run-in with the police.

This incident occurred only a few days after a video surfaced of another officer from the same precinct violently kicking a street vendor, when the man was already on the ground, restrained by other officers, and clearly no longer a threat.

The NYPD’s Internal Affairs is investigating both incidents.