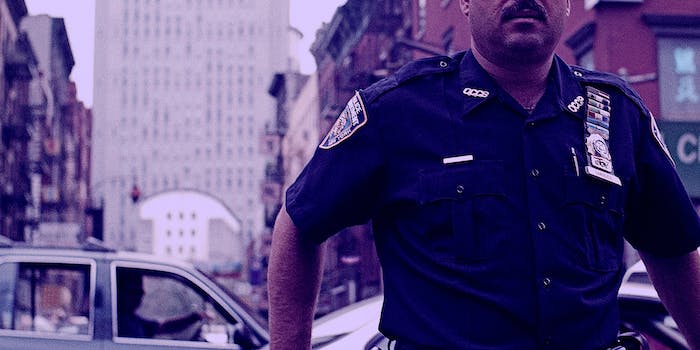 Eduardo Gaviña via flickr (CC BY 2.0) | Remix by Max Fleishman

The incident was captured from three different angles.

The NYPD is being accused of allegedly abusing its power after officers were caught on camera from multiple angles behaving badly. Again.

The incident occurred last year, but footage just surfaced Thursday on LiveLeak after lawyers representing the man involved in the incident uploaded the videos to YouTube.

On March 1, 2014, Jason Disisto and his buddies were hanging out, bullshitting outside the bar. His female friend stepped out to smoke a cigarette nearby. Two New York Police Department officers approached the woman. One began touching her arm for reasons unclear from the sound-free surveillance video.

The officer is then seen reaching inside the front pockets of her sweater.

Disisto, visibly uncomfortable with the officer’s behavior, asks to borrow his friend’s smartphone so he can record the interaction. The officers then charged Disisto and grabbed his wrist, though they would later claim that Disisto lunged at them with a closed fist—something that does not appear in the video from any of the three angles

The officers then arrest Disisto and put him in the back of a police car. Before driving away, one of the officers throws the phone out of the car window and onto the sidewalk near Disisto’s friends.

All charges against Disisto have since been dropped by the NYPD

Earlier this week, Disisto filed a civil suit against New York City authorities. According to NBC 4, his attorney filed a lawsuit against the the city, the NYPD, and the officers involved in the incident.

The Daily Dot was unable to reach Disisto’s attorneys for comment on the case. The NYPD did not immediately respond to our request for comment.

NBC 4 New York reports that in a six-month span, the Civilian Complaint Review Board, an independent agency with oversight of police misconduct, investigated cases of citizen journalists using camera phones to film the police. Twenty-seven out of 42 of those cases resulted in civilian complaints against camera-shy cops.

In most of the U.S., citizens have a right to record public servants in public. You are legally allowed to point your camera at the police as long as you are not interfering with an officer performing his duty.