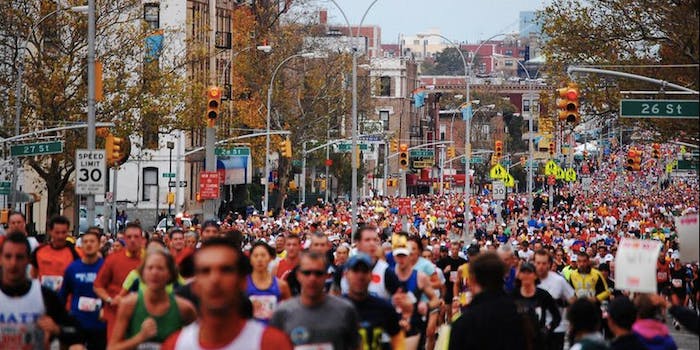 Sunday marked the New York City Marathon—the city’s excuse to burn off calories from all the Halloween candy. Its route touched all five of the city’s boroughs, so there were roughly 8.3 million potential Twitter, Vine, and Instagram users ready to document the race.

In Staten Island, some runners heard a Jewish daily prayer before starting.

Headed north on Brooklyn’s 4th Avenue, some had a banana waved at them.

Banana for the runners! #nycmarathon pic.twitter.com/QoaG1StoEI

RT @chrisdcomedy The streets of Brooklyn look like they have Rainbow Sprinkz on them. #NYCMarathon pic.twitter.com/knYedJ6fAL

Someone yelled what sounds like “France!” at those runners.

Going by the Brooklyn Academy of Music.

The awesome practice of looking up runners’ names by the number pinned to their shirt.

I genuinely love calling out runners names during the #nycmarathon https://t.co/dscTCEJ1zh

The route barely spends more than a mile in the Bronx, explaining a dearth of marathon tweets from there.

A runner grabs a Gatorade in the Bronx and keeps going #Lirunsnyc pic.twitter.com/Cf98OuAkC5

Part of Central Park West was shut down for the run.

…and was about to be greeted with some fancy marathon champagne.