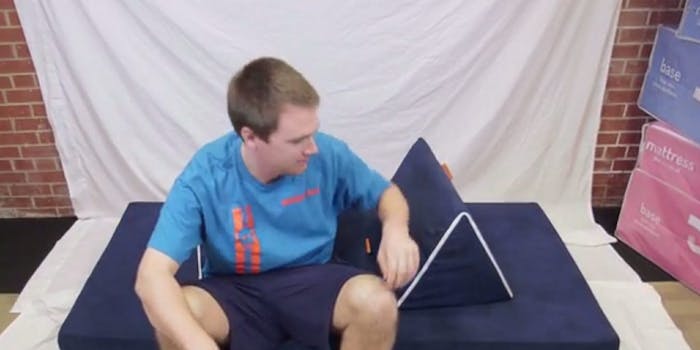 Buy the Nugget couch and make a serious interior-design statement

When shopping for furniture, go for the unconventional choice.

The first sofa made from pool noodle foam and micro-suede is comparatively inexpensive, washable, lightweight, and a major Kickstarter hit. Its pillows can be removed for use elsewhere, and its moving parts make it ideal for, say, building forts or a quick, flat bed.

We’re perhaps two years away from seeing this space-age couch, called the Nugget, all over college apartments or in homes overrun with messy children. It’s experiencing major Kickstarter success right now—the project has national retailers lined up and has eclipsed its $20,000 crowdfunding goal in one day. You can even have one of these $250 bad boys in time for Christmas Day (assuming you pony up by Dec. 17).

C0-creator David Baron poured some leftover scholarship money into his business shortly after leaving the University of North Carolina at Chapel Hill. He said the idea stemmed from disdain for the heavy and unpleasant furniture that America’s corner-cutting young deal with perpetually (futons, namely).

If you’re in the market for a new couch, why not buy one that’ll turn some heads?