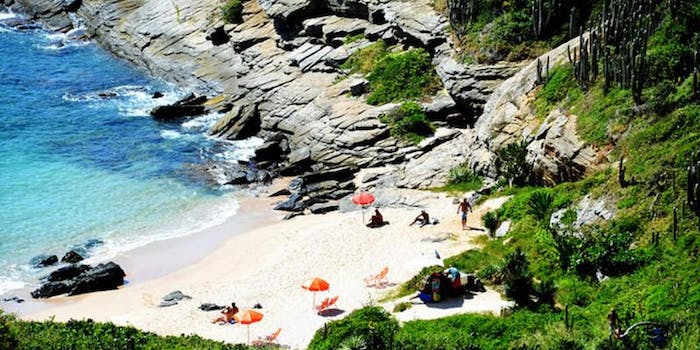 If you’ve ever been to a nude beach, you know you’re not gonna see ladies who look like Israeli fitness models, frolicking au naturel and engaging in aerobic lesbian sex acts. Mostly, you’re gonna see a lot of European men in gold-chain necklaces and retired Catholic school gym teachers.

But that hasn’t stopped a few pervos from trying to cash in on that hawt, hawt nude beach action, as evidenced by the sad tale of a amateur photographer who was ambushed by nude beach attendees and arrested after he snuck onto the beach to snap a few covert photos.

According to the Herald Sun, the nude revelers at Maslin Beach in Australia performed a citizen’s arrest on the Peeping Tom after they caught him using a hidden camera inside a blue water cooler. Enraged by the egregious violation of privacy, a group of 10 or so beach-goers chased the man down the beach and cornered him until police arrived at the scene.

“We said we’re going to wait for the cops to come and if they say it’s OK to film people naked without them knowing then it’s not a problem,” one of the renegade nudists told the Herald Sun. “But if they say it’s not OK then you are in trouble.”

But the nudists don’t seem too disturbed by the prospect of seeing their junk on the Internet. “It’s on a website that you need a credit card to access,” one said. “I’m not going to pay $30 just to see if my own arse is on there.” Fair!

So let this be a lesson to you, nude beach-trawling sketchballs: Nudists aren’t just laid-back hippies who plant prize-winning tomatoes and macrame in the buff all day. They don’t play. If you get up in their shit, they will actually fucking kill you. Or take your camera and perform a peaceful citizen’s arrest until the police arrive, either one.