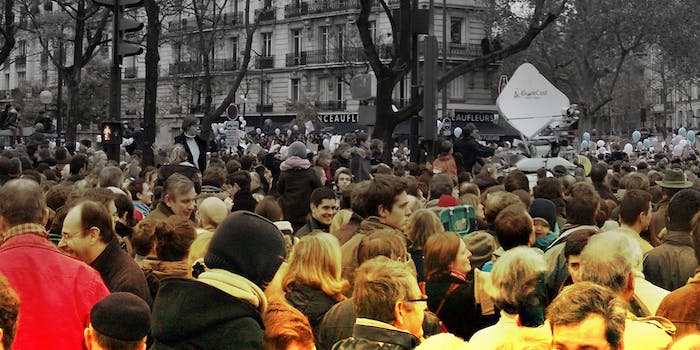 Northwestern student sits in a box in protest: ‘I was raped on campus’

The university remains mostly quiet about the event.

A woman sat in a box at Northwestern University yesterday, with a sign that read, “I was raped on campus. Now, I am the one who has to leave.”

A photo of the woman was posted on Facebook by Matthew Wright, a student at the Medill School of Journalism at Northwestern, and caught the attention of students and activists worldwide.

In his post, Wright insinuates that few on campus paid attention to the woman and just walked by.

Happening on campus right now. This woman was raped on campus and the university isn’t adequately responding. Do better Northwestern!
She’s been walking around with this box and people just look at her and walk by. Come on now! This is an issue that effects [sic] more people on campus than you think, whether they choose to speak out or not. Be aware of your surroundings, and support those around you. We are supposed to be a ‘community’ after all.

When reached for comment, Northwestern first quoted a statement from Vice President for Community Relations Alan Cubbage. Though it did not address the student’s protest directly, it did address that Title IX complaints are “taken seriously.”

Northwestern strives to protect all members of its community. The University is committed to fostering a learning, working, and living environment where all members of our community can thrive, free from sexual misconduct, including sexual harassment, sexual assault, sexual exploitation, stalking, and dating and domestic violence.

We stand behind Title IX and our policies support that commitment. As the University has demonstrated, when a person comes forward with a complaint under Title IX, that complaint will be taken seriously and the University will respond appropriately following its established policies and procedures. Northwestern has done so consistently in the past and will continue to do so.

When asked again via email if there was a student sitting in a box at Northwestern, Pat Vaughan Tremmel, associate director of media relations, confirmed that such a thing did occur on April 25, but offered no other details about the situation.

Attempts to reach out to Wright and to the student-run newspaper, Daily Northwestern, have thus far yielded no results in verifying who this woman is or whether she is back on campus today.

Regardless, she wouldn’t be the first to speak out about the treatment of rape victims on college campuses in relation to their perpetrators. Last year, Columbia student and performance artist Emma Sulkowicz infamously carried around a mattress after her accused rapist was found “not responsible” upon the university’s inquiry into the allegations.

More recently, Wagatwe Wanjuki, writing for the Establishment, blamed Tufts University for expelling her after she reported a sexual assault. In an open letter to Tufts administrators, Wanjuki noted:

I reported my sexual assaults to you and you did nothing. And then, instead of recognizing my floundering GPA as a cry for help, you chose to use it as an excuse to refuse to provide me academic accommodations and ban me from your school when I was a mere one year away from finishing my undergraduate degree.

According to the Association of American Universities, one of the reasons sexual assault goes unreported on campus is that students believe the school won’t do anything about it. They also cite being too “embarrassed, ashamed,” and thinking the process will be too “emotionally difficult.”