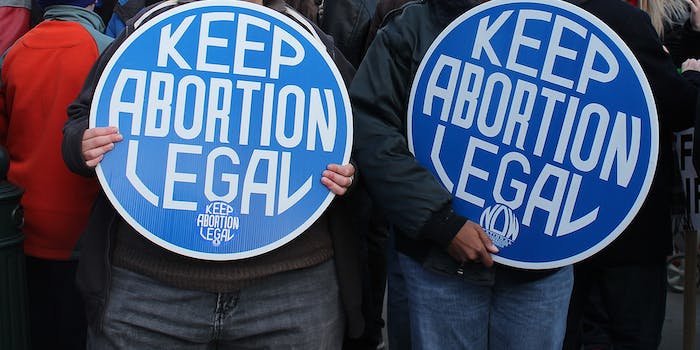 Pro-choicers call for Northern Ireland to fall in line with rest of U.K.

Pro-choice activists around the world are tweeting #Extend67Act in solidarity with a Northern Irish woman who was convicted yesterday of using pills she bought online to induce a miscarriage. The 21-year-old woman pleaded guilty to “procuring her own abortion using a poison,” The Independent reports, and she was given a three-month sentence, which was suspended for two years, by Belfast Crown Court.

The woman, who was 19 at the time of her arrest, could not afford to travel to England to get a safe and legal abortion—which more than 161,000 Irish women have done over the past 34 years—and instead called an English clinic, who advised her that she could take mifepristone and misoprostol, drugs that are available online, to end the pregnancy. She was reported to police by her housemates, who had discovered fetal remains and blood-stained items in the trashcan.

Although Northern Ireland is technically part of the U.K., women there are subject to a much stricter abortion law than in England, Wales, and Scotland, where abortion is effectively legal up until 24 weeks (with the agreement of two doctors) under the 1967 Abortion Act. By contrast, Northern Ireland’s Protection of Life during Pregnancy Act 2013 only allows for abortion when a woman’s life is in danger (including risk of suicide), with no exceptions for rape, incest, or fetal abnormality.

In November 2015, The Guardian reported that Belfast’s High Court ruled that the Northern Irish abortion law was in breach of the human rights of women and girls “who are pregnant with fatal fetal abnormalities or who are pregnant as a result of sexual crime.” However, the Northern Ireland Assembly voted 59 to 40 against relaxing the country’s abortion law in February 2016.

Women are increasingly purchasing miscarriage-inducing tablets online from websites such as Women on Web and Women Help Women, both of which offer the pills to women all over the world who are unable to access safe, legal abortion in their home countries. Ireland’s Abortion Support Network, which directs women toward trustworthy websites that offer the pills, told The Telegraph it had seen a 520 percent increase in women using these services between 2010 and 2014. ASN also runs a JustGiving page to help cover the costs of Irish women forced to travel to England for abortions.

"The court heard that the woman tried to travel to England for a termination but could not #CoverHerCosts." We can – with your help.

Goretti Horgan of Ireland’s Alliance for Choice told The Telegraph yesterday that in response to the case, she had made her credit card available to women who wanted to buy pills online but were afraid of their details being seized by police. She commented, “The law here is irrelevant in the age of the Internet.”

Other pro-choice activists were equally defiant. Amnesty International’s Northern Ireland Director Patrick Corrigan said in a statement yesterday, “We’re utterly appalled by the court’s decision to impose a suspended prison sentence on this woman. A woman who needs an abortion is not a criminal.”