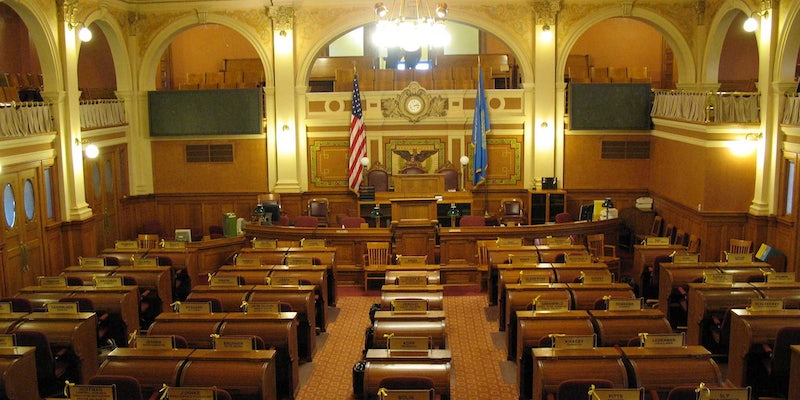 The hypocrisy never seems to end.

A Republican state lawmaker in North Dakota has admitted to sending explicit photos on the hookup app Grindr, a hobby that many people consider hypocritical given his anti-gay voting record.

State Rep. Randy Boehning recently voted against Senate Bill 2279, which would have prohibited discrimination based on sexual orientation. Boehning told local news that he was outed as political payback by an unnamed Capitol staffer, who had already warned him about potential retaliation before the vote on April 2.

Boehning’s Grindr history was uncovered when 21-year-old Dustin Smith contacted the Forum of  Fargo-Moorhead, a local paper, claiming that Boehning had chatted with him under the name Top Man! and sent him an unsolicited sexually explicit photo. After two weeks of silence, Boehning admitted this weekend that he was indeed Top Man!, saying, “That’s what gay guys do on gay sites, don’t they? That’s how things happen on Grindr. It’s a gay chat site.”

Boehning’s Grindr usage is indeed rather typical for the app—albeit skeevy, if he’s sending unsolicited junk shots under a pseudonym. But for obvious reasons, his use of a same-sex hookup app could be construed as a hypocrisy when compared with his voting record, which is why Smith came forward in the first place.

In an interview with local news, Smith asked, “How can you discriminate against the person you’re trying to pick up?”

As sex scandals go, this one is being handled with relative maturity. While Randy Boehning’s Grindr activity (not to mention his entertainingly appropriate name) is obvious fodder for mockery as a clichéd example of anti-gay hypocrisy, Boehning claims that he voted against the bill because he felt his constituents would not support it.

Once he confirmed that he was behind the Grindr messages, Boehning also came out as bisexual, saying, “I have to confront it at some point.”