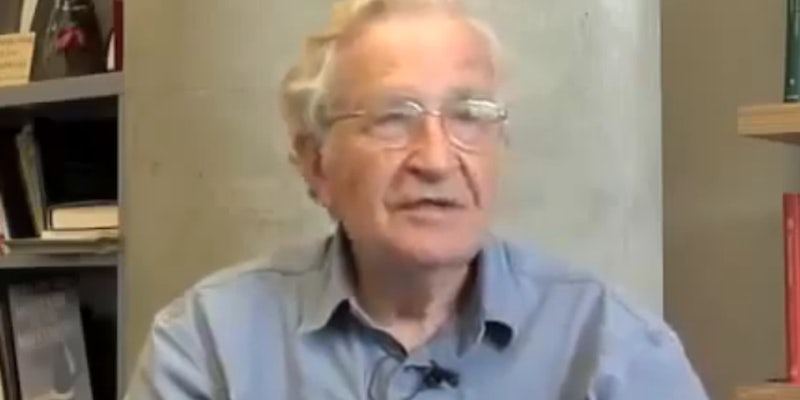 Noam Chomsky explains how the Internet made us stupid

Noam Chomsky, noted linguist and activist, took time out recently to eloquently explain how the Internet is making us stupider.

He’s the star of a short clip called “Noam Chomsky on Sandwiches and Twitter,” uploaded yesterday to YouTube channel the Chomsky Videos. The question he was asked: Does the generative potential of the Internet help to form new kinds of social or cultural associations? He says he doesn’t actually use social media, but that he can “see the effects” in his correspondence with people on YouTube and Twitter.

A lot of the emails he receives are one sentence long, he adds, and usually from Twitter:

“If you look at the nature of those one-sentence letters, you can see that most of the time it’s something that came to somebody’s mind, walking down the street, and they sent it out. If they’d thought about it for two minutes, they wouldn’t have sent it.”

This heightened need for immediate knowledge manifests via YouTube as well, where many commenters will ask for sources, or question why Chomsky said something. When he suggests they read past literature on the subject to get some insight, he says that usually ends the conversation.

“The idea that you might want to read something, it’s too much,” he says.

Chomsky adds that he can see the endless possibilities of the Internet, but that there’s a “cheapening” effect as well. He’s very even-handed throughout, but you can sort of tell he thinks we’re all doomed if we continue to devolve. Go smell a book after watching this.