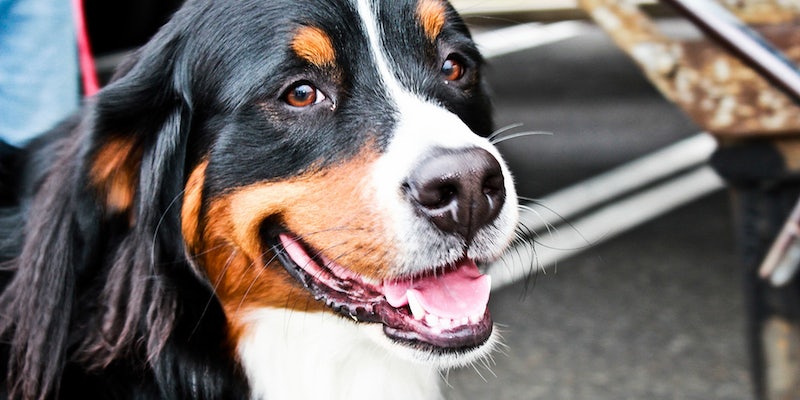 These researchers want to make the dogs from ‘Up’ a reality

Can you hear me now?

If your dog could talk, what would it say? Our guess is something along the lines of ‟Let me out of this gilded prison of Purina, chew toys, and belly scratches, I yearn for freedom.” Or, more likely: ‟You! Person! Give me food!”

The Malmö, Sweden-based technology lab Nordic Society for Innovation and Design wants to definitively answer that question with a project they’re calling No More Woof, a headset that supposedly can translate a dog’s thought patterns into a handful of pre-scripted phrases letting you know what your furry friend is thinking.

The Nordic Society, an outgrowth of Swiss retailer Micasa, insists that most of the technology required to make No More Woof work already exists, albeit developed for humans, and their main innovation is applying it to dogs. The system works by using using EEG readings to look at the electrical signals moving through an animal’s brain and then determining its mental state. In this sense, the product promises to broadcast a dog’s general sentiment, rather than its specific, nuanced thoughts.

The group has created an Indiegogo fundraising campaign to generate the money necessary to support the project. While the initial stated goal was $10,000, it’s already collected nearly $13,500 with almost two months left.

The group explains on its Indiegogo page that the product is still in development, but the developers have already been able to identify the canine mental states for, ‟I’m tired,” ‟I’m excited,” ‟I’m hungry,” and ‟Who are you?”

“We’d like to clearly state that the No More Woof is WORK IN PROGRESS,” the group explained on its Indiegogo site. “Yes, we HAVE achieved some results but we are very far from a mass-producable product. That said; we believe that within a few years the technologies we are working with will revolutionise our relation to pets and animals.”

No More Woof’s marriage of cutting-edge technology and quirky sensibility is par for the course with the Nordic Society. Some of the group’s other innovations including a magnet-powered hovering carpet that can support the weight of a small dog, a wall-size iPhone speaker, and the iRock, a rocking chair that charges your iPad.

Check out this video the group made about No More Woof: