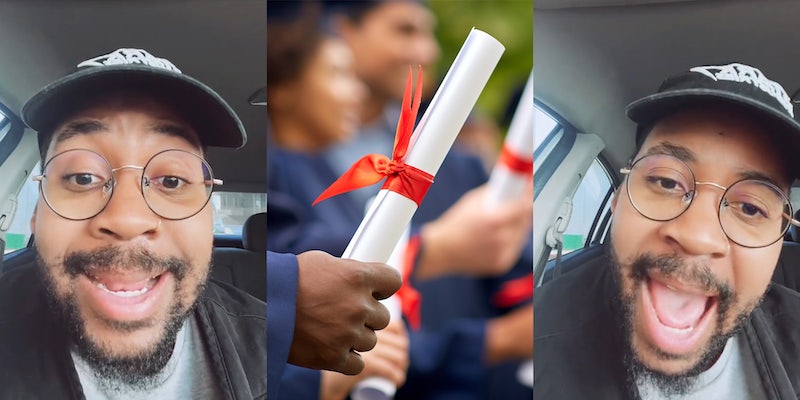 ‘What is going on with the workforce?’: Worker says he can’t get a ‘good job’ on LinkedIn with bachelor’s degree

A recent college graduate vents about the struggles of finding a “good job” even after getting a bachelor’s degree and building his resume in a now-viral TikTok. The video sparked debate about the current state of the entry-level job market.

In the video posted by TikToker Mikey Cook (@mikeycook) on Oct. 2, he suggests that the job market is “oversaturated,” discussing the difficulty he has had with securing a job after graduating, despite having internship experience.

“What is going on with the workforce? Why can’t I get a good-paying job with my bachelor’s degree?” Cook says in the clip. “Every time I go on LinkedIn, someone is getting the position that I want. Then a week later, the same position that I applied for is popping up again.”

In the caption, Cook says he built his resume by “working at UPS” and securing internships during his time in college. However, he adds that he noticed “barely” any of the new hires are Black—which prompted him to “stop putting [his] race on applications.”

“Y’all told us, ‘Get your degree so you can get a better paying job.’ And that’s what I did. And now I’m in student loan debt because of it,” Cook continues. “Something is going on. And if I see one more congratulations post on LinkedIn, I’m going to lose my freaking mind.”

@mikeycook Am I trippin or is it like impossible right now to get a good a job, I’ve done the whole 9 yards, worked at UPS, Internships, was a resturaunt server for years, went to school all at the same time and bounced from two toxic work places that had homomphobic people and racism. It should not be this difficult. Then I go on LinkedIn and see people after people getting hired ( mind you barely of them are black ) I had to stop putting my race on my applications cause it’s getting outta hand! Ughhh. #working #work #jobs #findingajob #linkedin #rant #theworldrn #workforce #applyingforjobs #toxicworkenvironment #idontunderstand #overit #bachelorsdegree ♬ Her – Megan Thee Stallion

The video has reached over 28,400 views as of Tuesday, with commenters sharing their own struggles to get a full-time job after graduating recently.

“I feel u I just recently graduated with a bachelors too it’s hard out here,” one user shared.

“THIS !! I applied to jobs get denied cuz they found a better candidate but the position is posted a few hours later,” another said.

“I applied for literally 500+ jobs. I received roughly 3 call backs. I went through one interview process that took 3 months,” a third wrote.

Several Black graduates also said that the job hunt has made them reconsider identifying their race on the application.

“I’ve literally put in 200+ applications last week and only got 4 interviews. Makes me wonder if I should put ‘white’ or ‘prefer not to say,'” a commenter said.

“Yeah because I’m about to experiment with names and genders on my resume atp,” another wrote.

The Daily Dot reached out to Cook via email.