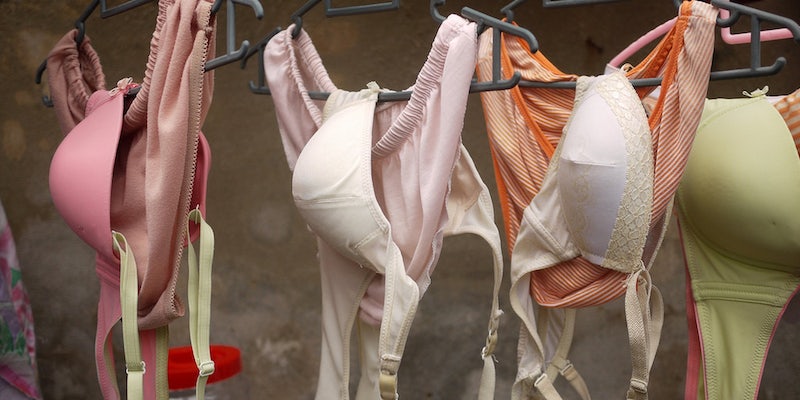 #NoBraDay campaign is just an excuse to talk about boobs, not breast cancer

Curious about why #NoBraDay is trending? The answer will probably gross you out.

October is Breast Cancer Awareness Month, and you know what that means: Time for a bunch of gross social media campaigns that minimize the dangers of breast cancer in favor of appealing to men’s love of big ol’ yabboes. The latest example of such campaigns is #NoBraDay, a hashtag trending on Twitter that’s intended to raise breast cancer awareness, but is mostly just a bunch of dudes excited about ladies letting those sweater kittens out for air:

Ladies it is national #nobraday so if you are participating and have a lack of support, I will be your support in these trying times.

Unclasp your bra and set those puppies free. #NoBraDay #BreastCancerAwareness

Set that tatas free and take a #nobraday selfie pic.twitter.com/8NShM9GBA0

Pls remove ur bras today…..its for ur own good #nobraday

It’s unclear exactly where #NoBraDay originated. The Lincolnshire Echo reports that it was founded by plastic surgeon Dr. Mitchell Brown back in 2011 as a way to “promote education, awareness, and access for women who may wish to consider post-mastectomy breast reconstruction,” and that “Bra” actually stands for Breast Reconstruction Awareness Day. But a widely shared image of a woman removing her bra appears to be from a 2013 post by Boobstagram.fr, a French website that says it aims to raise breast cancer awareness “with humor and fantasy,” but actually just features a series of photos of ladies’ boobs.

Whatever its origins, by focusing on how cool ladies’ boobs are in lieu of focusing on the estimated 12 percent of American women who will get breast cancer during their lifetimes, #NoBraDay is clearly the heir apparent to similar campaigns like Save the Ta-Tas, which was criticized for sexualizing breast cancer awareness back in 2013. (For their part, Save the Tatas refutes criticisms of sexism, saying its aim is “to fight breast cancer using laughter and fun. The organization claims to have raised nearly $1 million for breast cancer research.)

Although many Twitter users are clearly using #NoBraDay as an opportunity to slobber over how awesome ladies’ unleashed boobies look, not everyone on Twitter is so amused by #NoBraDay, and many are speaking out against the hashtag:

Just a thought, and everyone may disagree, but isn’t there a better way to to raise awareness about #BreastCancerAwareness then #NoBraDay?

I feel like #NoBraDay works to raise awareness about #CreepyMen or even @lululemon sports bras. Just my opinion #BreastCancerAwareness

How does #nobraday support cancer exactly? Stop showing your breasts and make a donation to cancer research/someone with cancer.#NoBrainDay

but yeah, it’s disappointing to see that people use #nobraday to sexualize women’s bodies instead of spreading awareness about breast cancer

This brave lady’s response is perhaps the most scathing critique of all: