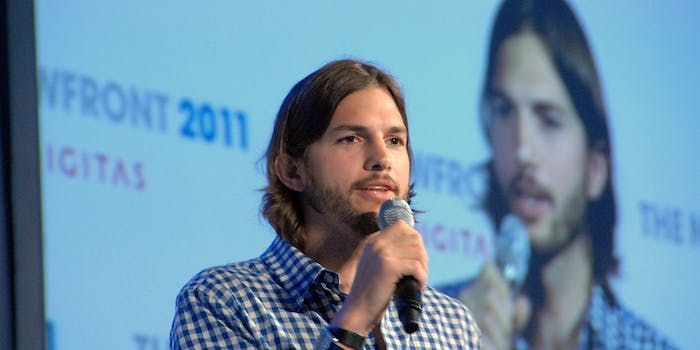 The latest hashtag campaign to rescue the kidnapped Nigerian schoolgirls is problematic in a number of ways.

Over the past week, the hashtag #RealMenDon’tBuyGirls has started appearing alongside #BringBackOurGirls, the social media campaign to release more than 200 Nigerian schoolgirls kidnapped by the Islamist militant group Boko Haram. #RealMenDontBuyGirls, which was one of the top trending topics on Facebook on Thursday afternoon, was often tweeted with images of celebrities like Ashton Kutcher, Sean Penn, and Justin Timberlake holding up signs of the hashtag:

We are glad to see @jtimberlake & the other great men lending their voices to #BringBackOurGirls #RealMenDontBuyGirls pic.twitter.com/ErINQu2Xfe

Human trafficking around the world must stop. What if it was your daughter? #BringBackOurGirls #RealMenDontBuyGirls pic.twitter.com/5cTgKQLUBt

Girls are to be appreciated not bought and sold. #RealMenDontBuyGirls Real men treat them as equals #protectourgirls http://t.co/iZ0ghDvXER

Anyone who was on Twitter a few years ago would have recognized #RealMenDontBuyGirls as a blast from the past: The hashtag was launched by Kutcher and then-wife Demi Moore in 2011 as part of his anti-sex trafficking campaign. Following the revelation that Boko Haram was planning to sell the kidnapped Nigerian schoolgirls in the bridal marketplace, people started tweeting the hashtag with #BringBackOurGirls, and it gained traction on social media from there.

For the most part, media outlets have celebrated the re-emergence of the hashtag in the context of the #BringBackOurGirls campaign, which has been re-tweeted more than 1.6 million times, helping to bring the plight of the Nigerian schoolgirls to the attention of the world.

But the truth is that when used in tandem with #BringBackOurGirls—a hashtag that, it should be noted, has been accused of having been co-opted by white Twitter users from Nigerian feminist activists of color—#RealMenDontBuyGirls is problematic for a number of reasons, chiefly because it has absolutely nothing to do with Boko Haram, or the worldwide efforts to rescue the kidnapped Nigerian schoolgirls.

The original #RealMenDontBuyGirls hashtag campaign and Kutcher himself were also criticized back in 2011 for relying on false or inflated trafficking statistics and trivializing the plight of actual trafficked girls and women. Sex workers and their allies also lambasted the campaign for conflating underage sex trafficking victims with adult sex workers, which they argued deprived sex workers of their agency.

But one of the dumbest things about the return of #RealMenDontBuyGirls is that it seems ineffective at best, and breathtakingly stupid at worst, to attempt to dissuade Boko Haram from committing acts of terrorism by hanging what effectively amounts to a schoolyard taunt over their heads: The idea that they’re not fulfilling some abstruse, antiquated notion of what it means to be a “real man.” One wonders if man-shaming the Islamist militants—who, let’s be honest, probably don’t have that active of a social media presence—is the best tactic in bringing the Nigerian schoolgirls back home (even if Boko Haram are big fans of Dude, Where’s My Car.)

Worries me dead when campaigns in support of women are drawn along old patriarchal lines. #RealMenDontBuyGirls #RealMenDontRape

The conversation around #BringBackOurGirls and #RealMenDontBuyGirls re-opens some interesting questions about the efficacy of hashtag activism, and whether raising awareness of an issue is tantamount to creating any lasting social or political change. It’s true hashtags like #RealMenDontBuyGirls have been instrumental in informing Twitter users about the plight of the Nigerian schoolgirls. But, couldn’t awareness be accomplished using a hashtag that actually has something to do with the issue, rather than regurgitating questionable old social media campaigns?