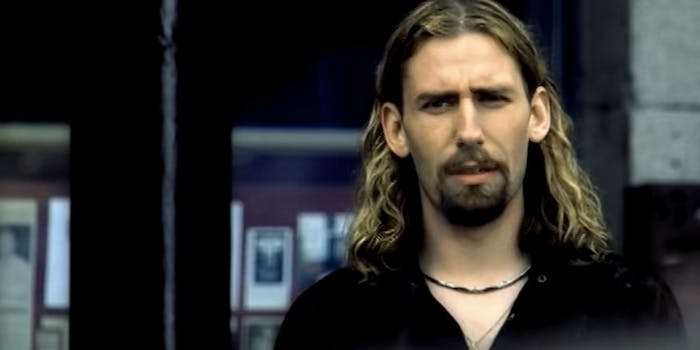 Could you listen to 160 hours of Nickelback for charity?

He's been wrong. He's been down. Down to the bottom of every bottle.

There’s a perfectly legitimate reason why RELEVANT podcast editor Jesse Carey is listening to Nickelback for one week straight: He’s raising some serious money for charity.

“The idea of a week of listening to Nickelback was too hilarious not to do,” Carey told the Daily Dot via email. “They occupy such a weird place in pop culture: They’re super popular, successful and have sold like 50 million albums, but are so loathed by so many other music fans. They seem to have a degree of self-awareness and sense of humor with their cultural status and polarizing identity that sort of makes the idea more fun.”

When Carey posted his fundraising page earlier in February, he set an initial goal of $5,000 to put towards clean water projects carried out by nonprofit Charity: Water. But just a few days after announcing his Nickelback endurance challenge, he passed his goal and set his sights on $10k. After one day into his challenge, he’s at $14k and rising.

“Evidently, I vastly underestimated people’s curiosity to see what would happen to a human being after getting exposed to more than 160 consecutive hours of Nickelback,” Carey wrote. “After all, this type of experiment would be far too unethical for any medical researcher to conduct. I’m not entirely sure what I’m attempting is even legal,” he joked.

On his fundraising page, Carey reveals his so-called “keys to victory” for surviving this grueling week of auditory torture: Frequent stretching, hydration, and psychotic breakdown avoidance.

But when we caught up with him at the end of Day One on Monday, it seemed that avoiding such a breakdown might prove impossible.

“The toughest moment was 12:01 Sunday night, moments after the challenge began,” Carey wrote. “It felt like hours had passed, but I looked down and realized I was less than halfway through a single song. That’s when I realized the gravity of my decision. I hit rock bottom within a minute of the challenge beginning.”

He even posted a video to convey his fragile state of mind:

Carey has two passengers along for this wild, ear-assaulting ride: His wife and 2-year-old son. But he’s sparing them as often as possible by wearing earbuds. Even at night.

“Regrettably, I said I would listen around the clock,” he admitted. “The first night was a fever dream of guitar solos and lyrics that mostly consist of extremely thinly veiled, non-ironic innuendos.”

And as if watching a man go slowly insane by listening to too much Nickelback wasn’t enough, Carey has included an added incentive for those following the campaign. He’s promised donors that if he can somehow reach the $100,000 mark, he will “undergo a full Chad Kroeger makeover.”

“My hope is that at the end of all this, the doctors will be able to help me achieve a full recovery—mentally and physically,” Carey said. “I’m not getting my hopes up, though.”